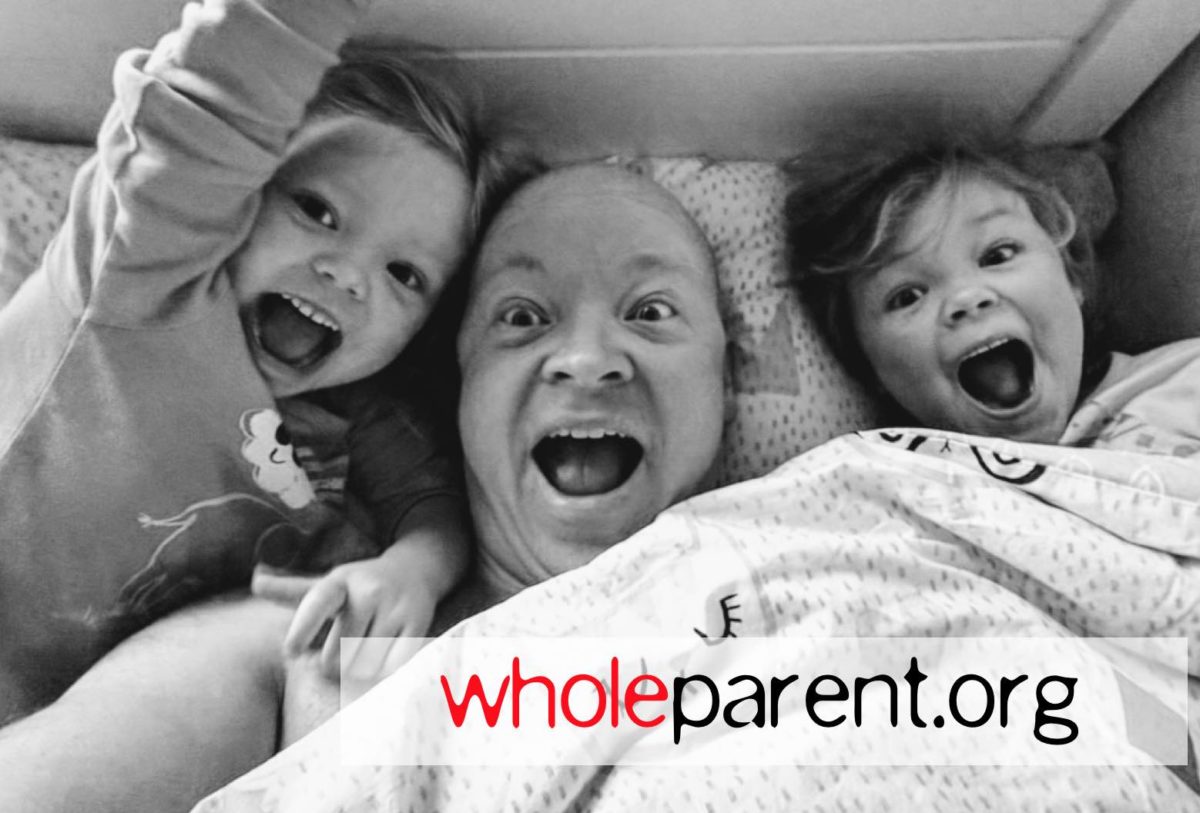 Take a look at the picture above. This happy dad is enjoying some evening reading time with his kids, a boy and a girl. Everyone is happy. Everyone is smiling. And… Mom is not in the picture. If we take the fantasy about this family a bit further we might imagine that mom is taking the photograph. Nice. We’re all in this together.

When We Were Fab

As we embark on the journey of becoming parents we are on a tightly-knit, highly-emotional, team. We decide, for better or worse, to begin having unprotected sex with the expressed intention of adding children to our partnership. But, make no mistake, the partnership started with you and your partner, BEFORE the kids arrived. We do crazy things in the name of “getting pregnant.” We screw at all hours of the day. We use odd positions that are supposed to help. And we dream of our family being exponentially expanded by one child. And, in our case, we were successful after less than a year.

In those first hours of my son coming into the world, I was completely transformed into a dad. I did not take a single breath after he was born without my hand on his shoulder. I followed him into the incubator room (where mom could not go, she was recovering). I followed him into his heel prick and frustrated screams of injustice. It was my voice he heard, “It’s okay, buddy. It’s okay. I’m here.”

We moved forward as a new triad and contemplated what life would be like if we were gifted with a second child, a girl. Even as we were both exhausted and elated by the new baby, we were hungry for more. More us. More family. More WE for us to be as a family. And with our little boy strapped to our backs or chests, we moved forward with our dream of having a family of four. And we lived the dream. We cooperated on every single task. And we promised to love and hold these children NO MATTER WHAT.

When We Lost Our Halos

Life is not all unicorns and rainbows, of course. We had some complications. There was a blood disorder (a very rare one) that was causing our emerging daughter to not thrive in the womb. Our little triad entered the world of modern neonatal medicine. And every Monday morning for several months we visited our surgeon’s office, very different from our familiar OBG-YN office. And Mom was hooked up to a sonogram and we listened for the health of our tiny child’s heart. And she was struggling.

The good news is we had great insurance, and our surgeon was able to do some miraculous microsurgery and give our daughter some healthy blood directly into her umbilical cord, while she was still gestating. That bought us an extra three weeks of oven time. When our daughter was born she was not whisked to the neo-natal ICU, she was plopped on my wife’s belly to find her first “latch.” She was 100% healthy, and more than just feisty, she started life with the energy to “get it done.” My daughter is still full of determination and focus.

The bad news is we began to struggle both as a family and as a couple. The part I left out was 9-11. The world’s heart was ripped out just as our first child was nearing 1-year-old. The chaos and trauma affected all of us. Somehow, my wife and I decided to be courageous and go for it, “Let’s have another child.” It might have been a risky decision, but we were both confident in our near-year of parenting, that we (as a couple) could handle anything. We believed in each other enough, even in that dark hour of history, to seek our dreams together for yet another child. We almost felt guilty when we were blessed with a healthy baby girl. Almost. Mostly we were thrilled, exhausted, and grateful that we had achieved our imagined dream of “one girl and one boy.”

When Love and Children Are Not Enough

I usually wake up happy. Every day, even in times of great stress, I am able to rise with the dawn and pray for the strength to live my best life. I tend to live on the optimistic and bright side of life. I’m not sure my then-wife has the same emotional makeup. And while we didn’t have tools like the 5 Love Languages while we were still married, as we divorced and I began sifting through the ashes to learn how I had failed, I learned that our core needs and values were quite different. This is an extreme reduction, but after the divorce, it was obvious how my TOUCH language was not meeting her ACTS OF SERVICE needs.

I wouldn’t say we drifted. I’d say one of us began to get more and more frustrated with the quality and cadence of their life and the only possible resolution of the pain was to change the relationship. We did some couples therapy. We did some emotional release work to try and regain our happy selves. And one of us remained unsatisfied and unfulfilled.

Money troubles might have been the ultimate trigger that caused my then-wife to ask for a divorce, but her emotional pain was much louder than any situation or lack of resources could justify. And of course, there is no need to justify emotional pain, it just is. And, unfortunately, it’s each individual’s burden. I tried to make things better. I tried to do more chores, take the kids more often, make more money, and take fewer naps, but… It wasn’t about what I was or was not doing. The sadness and dissatisfaction were inside her.

In the last meeting with our therapist, as she had asked for a divorce and I had asked her to reconsider, we were asked to summarize our current understanding of the situation.

“I think we’ve had another fracture. And I see this one as a real opportunity to reconfigure our lives around what’s important to each of us, and reestablish our family roles in that direction.”

She had a very different take on our marriage.

“I don’t trust you. I don’t think things are ever going to change. I am not getting my needs met in this relationship.”

And with that, I was asked to leave the family.

Dads Are Sent Away in Divorce

Now, look at the picture above again. See the happy father and the happy kids? Don’t you think the kids need that happy father just as much as they need the maybe-less-happy mom behind the camera? Is it possible that a balanced divorce and a shared custody arrangement would’ve given my kids more of my joyous approach to life?

As it happened, I was asked to leave the house to my family. I was asked to pay for that house and the kid’s health insurance. I was told I could see my kids on alternating weekends. And I was assigned the non-custodial parent role that has very little authority in Texas. As it happened, my kids got much less of me than they did of their mom. And I was given the ejector seat blast out of the routines and emotionally loving environment that I’d help create. I’d say I held a good portion of the heart of the family. That’s not to say my then-wife was not a loving mother. But, she didn’t have the same joy or emotional availability that I had. I was the loving, nurturing, supporting dad. I was the dad who makes French toast every morning and gets everyone to school. I was the emotional and loving center of our little rocket ship of four. And I was given my spacesuit and asked to leave the capsule.

This morning, when I came across this photograph on social media, I was struck by everyone’s joy. I remember these exact moments. I remember being that every dad. And I remember the mom on the other side of the camera who made the life-altering decision for all of us. She made a choice. She had made a similar emotional choice a year earlier, as she flirted and went to lunch with a younger work colleague. She was no longer committed to the dream we had created together, and rather than work on it so more, she decided it was time for me to go.

If my then-wife had been given the 50/50 option I am not so sure her decision would’ve been so clear cut. But current family law has moms getting the cash, the kids, and the house, in most states. Dads? We get a big payment, a significantly reduced amount of time without our kids, and the task of finding a place to live and the money to pay for it, after all the kid/divorce expenses are covered. The financial ruin on divorced dads is real and, in fact, it’s killing many of us as we struggle to reconcile our time in isolation and our financial ruin. Suicide rates among divorced dads who lose custody are 3X higher than other middle-class men. We know there’s a crisis of mental health in America, but some of it is perpetrated by the unfair family court system that strips dads of their kids, their money, and their dignity.

I’m working to help local lobby groups make a difference in family law in Texas. If you’re a dad or an interested party, get in touch with your local men’s rights or dad’s rights groups. They can help. They can provide support for what you are going through. And with a lot of hard work, we can bring balance into the divorce process.

Can you imagine my pre-kid wife agreeing to a 70/30 split of duties and responsibilities if we decided to have kids? Nope. It never would’ve happened. Would my then-wife have worked harder had she not been given the golden parachute of Texas divorce and the SPO? Who knows.

Grateful Dad To This Day

I do my best not to bash my ex-wife in these pages. Occasionally, I have to let the honest pain out. It was not fair what happened, and in many ways, my ex-wife was the architect and builder of the divorce.

I can also tell you, I’m happier than I’ve ever been. Even after a divorce, you can put your life back together. You can suffer only 30% of the time with your kids, and thrive. It might take some effort, but dads are doing it all over the country. Making all their child support payments, making all of their kid-time appointments, and doing their best to support an angry spouse who may still be firing poison darts at them. Dads! We are bigger than this. And we should be given a fair share of our parenting rights AFTER divorce as well as BEFORE having kids.

I’ve still got work to do on letting go of my resentment. This post on social media yesterday triggered my anger and probably had something to do with this post, today. 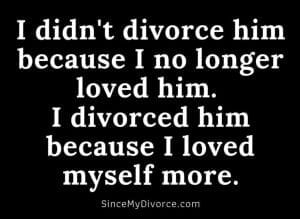 I’m working on it. But I’m not over it. I find it interesting that 80% of divorces are instigated by women. Do you think that would change if the divorce brochure were not so lucrative in most states?

I still only see my daughter by appointment. Yes, I agreed, that’s how she wanted it, (Living 100% of the time at her mom’s house) but that doesn’t make it any more pleasant. And, obviously, it’s not her mom’s fault.

image: my two kids on the last birthday party before the divorce

Sex, Love, and Relationships: Dating Is A Bit Like Space Travel

The Good Dad’s Divorce: Being Asked to Leave Everything Behind