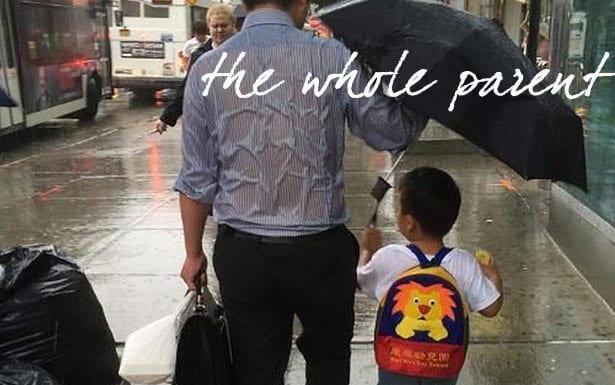 It does not matter if you are the parent who says, “I want a divorce,” or the parent who is surprised by the fracturous disclosure, your life and the lives of your children will be forever changed. You can’t walk that one back.

For me there was no mystery that we were in trouble, the admission came during couple’s therapy, but the form and bluntness of the admission was even more devastating. Something she was saying, in response to a question from the therapist gave me a hint that all was not well. I struck with some sort of defensive instinct. I asked, “Have you already been to see a lawyer?”

That second. When she blushed and nodded. That second began my training to become a divorced dad.

In many ways, I went under the bus with a quiet gasp. I agreed after several sessions more that working together required both of us wanting to be married. One of us didn’t.

I cried and wailed, but mostly to my individual therapist. And mostly I was crying about my parents’ divorce. I did not ever want to inflict that kind of pain on my kids. And at the outset of our divorce planning, I was determined not to repeat the bitter struggle that defined my 3rd grader through 8th grader experience of life. Yes, my parents divorced over a long and extended battle. But it wasn’t so much about custody. It was about money.

We didn’t have a lot of money to argue about. We had debt, which would come into play later. And we had two kids, a house, and two cars. What we had from the start, and what we continue to put at the front of any of our discussions is the “best interest of the children.” Now, this phrase may come back to haunt you, but there are ways to get over your own pain and continue to be an awesome divorced parent.

It was early on that we agreed to do our divorce cooperatively. We would focus primarily on the kids and the parenting plan. We’d get a divorce accountant to help us “run the numbers.” And we’d agree to not fight with lawyers. We got through all of those agreements pretty quickly, once I agreed that divorce was the only course of action.

I sometimes try to play the higher/lower game where I blame my ex for the divorce. “It was her idea.” But the reality is, I was just as angry and frustrated by our relationship as she was. It was my parent’s divorce and the devastating aftermath that kept me terrified of divorce.

Newsflash from the present me to the just divorcing me, “It’s actually going to get better after you divorce. It might take a while. You’re going to have to do some work on yourself. But the divorce is the best thing for your situation.”

It’s no mystery that an unhappy marriage and angry parents breed some pretty unhappy kids. Had my parents stayed married my life would’ve looked a lot differently. And while it’s easy for me to see how their divorce distanced me from my father’s alcoholic demise, I could not understand or cope with the loss when I was 8 years old.

Things are very different now. Most of my kid’s friends have divorced and remarried parents. It’s not a stigma for them. It’s *us* the parents that have to get out of the way and let the separation not be a horrible, awful, most destructive thing. Let me say that again for emphasis.

The separation of divorce is not horrible. The divorce may actually be better for all parties involved. It is our reaction and past-history with divorce that becomes the issue. I had a hard time with the divorce. I hated the idea. I fought to keep things together. And in the end I fell into a depression over the loss of my 100% parenting role. All these antics and struggles I needed to go through, I suppose, to finally break down enough to let go.

In the end, divorce is about letting go. But we’re letting go of the things that don’t work. We let go of the pain that comes from being in bed with someone you love and feeling more like surfing Facebook than making love. We let go of the fantasy that we had when we started the marriage and parenting journey, where we claimed, “We will be different. We will win. We will never divorce.”

The biggest transition in my life happened when I lost my marriage. The amazing thing is, out of the other side of this wreckage that I became, I also re-emerged as a writer. The plays and novels I had been trying to write, suddenly spilled out in blog posts about divorce and parenting.

What my divorce gave me was the freedom to become who I wanted to be all along. The roles and constraints of my marriage had strapped me into a course of action that was killing me. At my high-paying corporate job, I was gaining weight, developing high blood pressure, and feeling pretty crappy about life. Sure, I came home to the picket fence and the smiling kids, but the wife was not so happy, and dinner was rarely in the oven.

The parenting dream and the American dream and the artist’s dream are often set up in opposition. If I can’t make a living as a writer or musician, I’ve got to find ways to make a living and hope that I can keep my creative passion alive in the fragments of time I have left. And parenting was the biggest responsibility I had, and have. There is nothing more important than my kids… Wait a minute. Let’s back that one up a minute.

More important than your kids is YOU. In order to be a good parent, you have to survive. Depression and soul-crushing workloads are not acceptable. And more than survive you have to show them how to thrive, even under the circumstances that seem dire and depressing. In becoming a stronger person, in showing them how I could roll with the punches and get back up as a man and a father is one of the most important lessons I can transfer to them.

Thriving as an artist, even if I don’t make a penny from it, is also part of my gift and my message to my kids. You need to know what you want. From there you can rebuild from any setback and regroup, reset, restart.

The divorce was a hard reset for me.

The gift that I was given by my then-wife’s admission, was the gift of my creative soul. If I had aligned myself towards corporate work and being the good dad with the nice house in the nice neighborhood, I might have really suffered a death. My own creative death, and ultimately the death of many unhealthy white professionals who struggle along with little joy or passion.

I had the joy and passion in spades. I had a misaligned marriage which generated two wonderful kids. Today I have reset myself towards a creatively fulfilling life. I hope that my children learn from my example. That even in the darkest of times we may find the answer we were looking for all along.

My divorce was also my rebirth as a writer and musician.

My new relationship came to be out of an alignment with my dreams and hopes for the future, and hers as well.