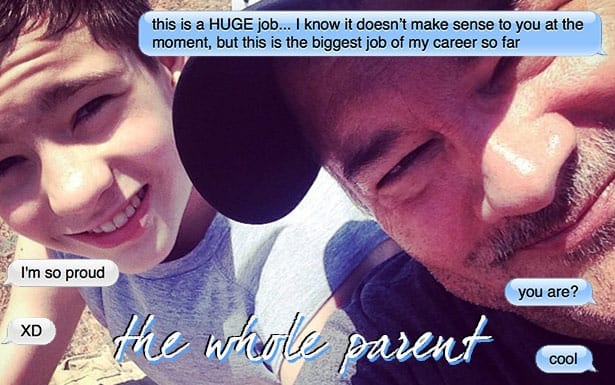 I am fairly certain I never told my dad I was proud of him. There were lots of reasons for that. Last night when I was having a casual chat with my son about my new job, this conversation came out.

“this is a HUGE job… I know it doesn’t make sense to you at this moment, but this is the biggest job of my career so far”

It didn’t really strike me until this morning that my son had told me he was proud of me. I know there were a lot of factors in his declaration, but the moment really came home as I was thinking about my dad. And I’m pretty sure, due to the uncontrollable circumstances of his drinking that I never told my dad that I was proud of him. And maybe his dad had never said it to him or visa versa.

But last night my son gave me a gift. Without even thinking about it, at the speed of text, he said it. And backed it up with a super smiley text icon. We moved on to discussions about what kind of computer I was going to get and how many monitors I would have on my desk, and other techie stuff. But the chord of joy was struck in me. My son is proud of me. And while my new job will lighten up the financial load a bit for all of us, his mom included, what I heard from my son was, “I am proud of you.”

In the last months of my father’s life, we had some sober days to recover what we could of our relationship. He had left the home when I was six and turned into more of a bear and bastard as he married a new drinking partner. There was so much anger and sadness around my father that it was hard to maintain any relationship at all with him. But sons will be sons and I continued to try and have an impact on my dad’s life. I tried to show up at his house and dazzle him with my accomplishments. But nothing really worked.

I hoped when I won the district tennis championship in 7th grade that my dad would acknowledge me. Or when I got all a’s, or was accepted into the most prestigious prep school in the country… But he didn’t. In fact with the prep school announcement he actually raged at me in a drunken stupor late and night and kicked me. He seemed incoherent, but it was clear that he was unhappy about me escaping his circle of influence. But of course, that was the goal of going thousands of miles away to school.

My escape didn’t last long. Over the first Spring break, when I didn’t come back to town, my father suffered his 3rd major heart attack. I was summoned to the dean’s office for a phone call. It was his new wife, slurring and crying telling me about him. He was okay. Still in intensive care, but he was going to make it. It was the worst phone call of my life. Ever.

My life spiraled into a series of bad decisions and depressions that lasted most of my young adult life. And during my sophomore year in college, my dad died of cancer. More chaos. More sadness.

And even after all this, today, I am aware that I didn’t say how proud I was of my father, ever. I’d like to say it now. “My dad was an amazing doctor. His patients and staff loved him. And his success in medicine would be hard to replicate in any field. He took better care of his patients than he did his family, and certainly much better care than he took of himself. Dad, I am proud of you. You were amazing.”

As he was dying we had an opportunity to reconcile to some extent. He never really understood my English degree at the university. He was expecting a doctor or lawyer. Maybe both, he told me once, “A medical-legal lawyer,” he said. “Then you would be set.”

What he didn’t ever understand is that if he would just sober up and take care of himself we would all be set. He didn’t take care of himself after the divorce and he slipped further away from being my dad. He made some offers over the course of my high school years. He would build a room for me over the garage. (But he didn’t, and it was an afterthought on his brand new house. There was no room for me.)

And one day while I was in college, I brought him a particular short story to read. It had been published in the university literary magazine. He read it but I could tell it didn’t make sense to him. He smiled, sipped his Cutty Sark, and said it was “nice.”

I was never able to live up to my father’s dreams for me. He died before I even got a chance. And in the same sad way, I never got to tell him how amazing he was to me. Of course, I’d be talking about my memories of him from 0 – 5 years old. Not a lot of time with my hero-dad.

Today I am not a hero to my son. I’m simply a dad who is present and caring. I am interested in every one of his activities as he grows and changes in the first weeks of 8th grade. And I can see what an amazing young man he is turning into. I wish my father had gotten the same opportunity to recognize and appreciate me. And perhaps I would’ve been able to appreciate him back.

Instead, he was cut loose from the family, as a result of his own decisions to maintain a drinking relationship rather than a human one. And as he descended further into hell, we all went with him, even as we were trying to escape the loss and vacuum his absence created. And when he died my two sisters and brother and I stood together and wept. He had become so fragile as he was dying. We could hardly remember the scathing rages that had terrorized our lives while he was living in the same house.

We are tied to our parents emotionally for our entire lives. The relationships we had or have with them form a lot of the information around how to be in a relationship at all. And as I forgave my father, after his death, I began to forgive myself for not being able to save him, or at least be awesome enough that he would quit drinking.

I know now that waiting for the other person to change is a dead-end street. My dad might have wanted to change, but he didn’t find the way to do it until the medical procedures prevented him from drinking at all. And then for a few short months of remission, his children all rushed back to town and to his side to attempt our repairs with him. And we all did our best. We cried, laughed at “what might have been even” in the tragedy we all knew was right around the corner.

I’m excited to live through those times WITH my kids. And I will be 100% positive and 100% present for all of them, as long as I live.

Note: I have written the experience of losing my father, the deathbed scenes, the aftermath of his death, my entire writing career. I will probably keep trying to capture the depth of the emotion of that loss for the rest of my writing life.

Back to Positive Divorce

Rebuilding Myself Into the Person I Was Before We Married

The Care and Feeding of Your Lover

Sexual Fulfillment: I Don’t Know The Answer, Let’s Find Out Together