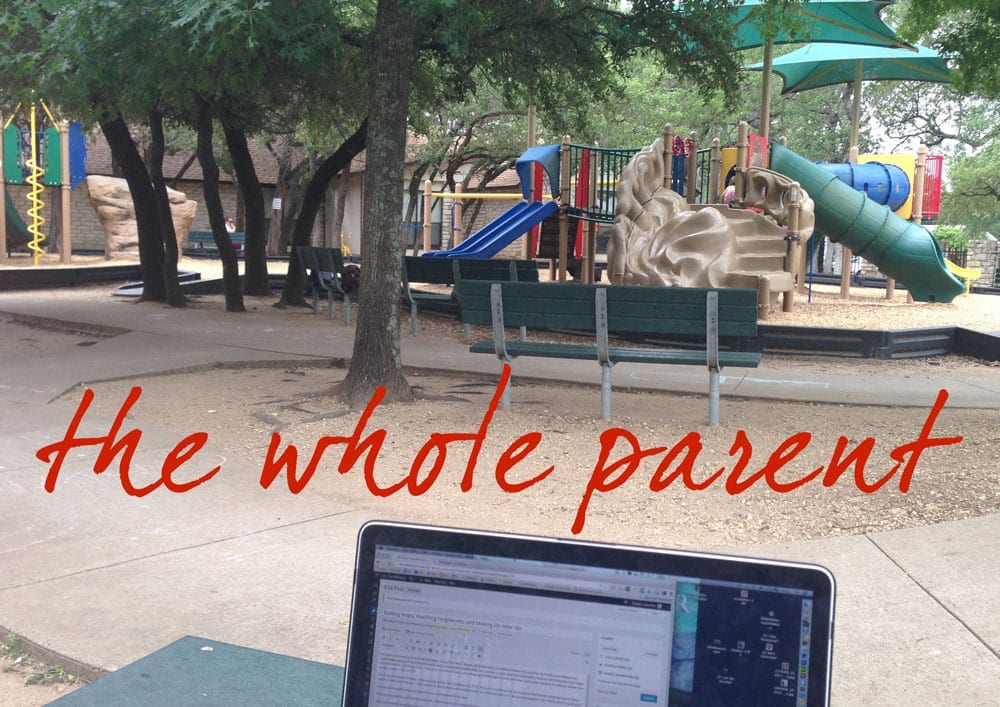 My ex-wife divorced me because she was uncomfortable with the hard trend my depression had taken after 9-11 tanked the economy. She was scared. She suffered from her own version of depression and pharmaceutical remedies. But at some point along our journey, my then-wife decided to investigate her options for divorcing me. She forgot to mention this turn of intention in our marriage therapy, but hey, we’ve all got our own paths towards happiness, right? So my then-wife’s idea became: he is the reason I am unhappy, divorce him and my authentic happiness can begin.

That’s not exactly how it works, as we all know. But my then-wife was in distress. She was tired. She was exhausted. And she began to feel hopeless and trapped in the marriage, rather than optimistic and encouraged, as I was. We had/have a different approach to life and life challenges. To this day, nine years later, I believe my ex-wife is still angry with me about something. It can’t be the divorce, right? I mean she asked for, architected, and executed the divorce.

In the process of divorcing me, she established her new sense of self-worth and self-love. She was a pretty woman alone in a thriving city. Sure, she had two young kids (6 – 8), and sure, she was about to have to re-enter the 40+ hour work week. But she must’ve seen something in the idea of being a single mom that appeared better than what she had.

Yes, I was depressed. Yes, my income had been in flux since 9-11, partially because I was part of this new tech trend called “social media.” And partially because the economy and marketing, in particular, took a significant hit after all businesses had to scramble to keep the doors open. In this midst of this struggle, the birth of our daughter took on significant medical challenges. We struggled mightily with the life we had chosen.

Along that path, my then-wife took a quick exit. She decided and asked for the divorce within a few months. She failed to mention any of it until she had her financial ducks in a row, the house documents secured, and a line on a new job that would allow her to keep the house, after a $1,500 child support payment from me. (We lived in a nice neighborhood in a nice house, with nice schools.)

Are You Happier Since Your Divorce?

So, after 8+ years of meeting the bus after school, my then-wife opted for doing something else. And I suppose, this decision comes for ONE partner in any marriage if divorce becomes part of the future plans. At some point, my then-wife, made the decision, based on her level of unhappiness, her own level of depression, and her feelings of hopelessness, that she would be happier if she divorced me. The part I don’t think she took into consideration was the kids. Would THE KIDS be happier after the divorce?

We’re they happier? No. Did life get easier and more joyful for my kids and my ex-wife after I left the picture and the house? No. Would I change the divorce today, knowing what I know now? No. Would I have done it differently knowing what I know now? YES. 100%. Today I would fight with all of my energy and resources to get 50/50 parenting and a 50/50 parenting schedule. The SPO (standard possession order) that is handed to dads in the state of Texas is a travesty of emotional and financial injustice. And it’s simply NOT GOOD FOR THE CHILDREN.

What the state tries to tell you, “This is how it goes. The kids will be happier and better served by being with the mom 70% of the time. This gives dad a chance to work more, since he’s going to be on the hook for the family home AND any other place that he might light to sleep at night. Just think about the fairness of this:

My ex-wife got the nice house, the equity in the nice house, and a $1,500-per-month payment from me, tax-free, to help her pay for the house. She also got the kids for 70% of the parenting time.

What she should’ve gotten was 50% of the time with the kids. And we should’ve split the money down the middle on everything. If WE could not afford two houses, or a house (where the kids lived) and an apt for dad, well, didn’t we need to reconsider the financial arrangements, just like we did when we were divorced? The right answer is YES, OF COURSE. The state’s answer is, “We’ve done it this way for a long time. To simplify the process, we’re going to award the mom with most of the time and all of the money.”

I was firmly rejected when I started offering a 50/50 schedule. Our paid divorce therapist advised me to “go with the plan” rather than fight for 50/50 custody. I gave in. I was not feeling strong about my own emotional state. When I was feeling depressed, I often believed that my wife was a better parent. MY WIFE IS NOT A BETTER PARENT.

As you will see, if you read deeply into this blog, my intentions and actions were to be the best co-parent, and single dad I could be. What ended up happening, as a result of the power and control awarded to my wife through the family courts, was my wife thumbed her nose at co-parenting with me. She no longer asks for any advice, any connection, any contribution to the parenting of OUR children, except for money.

Oh yes, she still asks for money. Perhaps the $1,500 wasn’t enough. And perhaps the $910, for one-child, is really not enough… But what about co-parenting?

Power and Control: The Custodial Parent

When my ex-wife sent our decree to the Attorney General’s office for “enforcement” she was not concerned that I wasn’t’ going to pay her 100% of the child support. She was not afraid I was hiding money. She knew I was not going to skip out on being a dad to my kids. But if it wasn’t about the money, what was it about? Why did my ex-wife throw me to the dogs?

If you are still angry at your ex-husband nine years after your divorce, you might need to do some serious soul searching. I am no longer the source of my ex-wife’s unhappiness. I am no longer responsible to deal with her fluctuating moods and angry outbursts. I only have to answer to my kids. She can take a hike. She can also have the money. And that’s not going to make her happy.

Only You Can Make You Happy

So, what is happiness? What is disappointment? When someone’s expectations are not met they become disappointed. When someone assigns that disappointment to someone else, that’s projection. My ex-wife is unhappy because she still blames me and others for what’s not perfect in her life. I’m not sorry for her. I’m not sympathetic, any longer. I’m not gloating either, because my kids suffer from being constantly exposed to her anger and irrational actions. Again, not my circus. They are my monkeys, but I share them 50/50 with their mom.

If we had started as co-parents, and the state stayed out of our lives and allowed us to negotiate a 50/50 parenting schedule, we would have happier, more-balanced kids. That’s not what happened. And, guess what? The kids are fine.

We’re All Fine, Except for My Ex-wife

There’s a problem today in my ex-wife’s management of my kids, that I’m having a hard time with. During the course of a normal day, my daughter can NEVER reach my ex-wife via her phone. Even when running and errand for my ex-wife, my daughter can often not get clarification on the errand during the course of fulfilling the task. My ex-wife is simply unreachable. No number of texts, phone calls, or … well, what else could my daughter do, if she needs to talk to her mom?

But let’s say there’s an emergency? How is my daughter supposed to reach her mom in the case of an emergency? The reality is SHE CANNOT REACH HER MOM. So, she calls me. That’s okay. I’d rather it have been me first and her unreliable mom second, but again, that’s not the way it went.

I’m sure my kids have deeper and stronger relationships with their mom. That’s maybe not 100% a positive thing. I think my ex-wife’s anger and entitlement issues have rubbed off on my kids. They will be fine. We’re all going to be fine. But if the psychologist we hired to develop the parenting plan had not balked at a 50/50 plan… If the state had not awarded Custodial-parent status to my ex-wife. If my ex-wife had not been given a paycheck each month to support her own lifestyle… Perhaps things would’ve been better for my kids.

Today and Tomorrow, Co-parenting with a Narcissist

My ex-wife thinks mainly about herself. She’s always done this. It’s part of her DNA. It’s probably part of how she was raised. And so, in divorcing me, she hoped that she would find greener pastures alone or in the arms of another man. I hope she’s happy. It doesn’t seem like that’s the case, but what do I know? I only know that she’s shirking on her responsibility to be an available parent to my daughter. That’s okay, I guess. That’s where I step in as an available parent.

Moving forward, I leave my ex-wife to her own devices. When I asked my daughter yesterday if she wanted me to bring up the no-contact problem between her and her mom, she said no.

I am here to support my daughter and my son. I have done the best I can, under trying circumstances. I can do better. The state of Texas can do better too.

At 16 I can begin to have an informed conversation about these issues with my daughter. When she was 6, obviously, I had to go along with the party line and lie with her mom, that the divorce, was “our idea.” The divorce was NOT our idea. I’m glad it happened, but it should’ve happened in a much more balanced and positive way.

Someday You Will Be Loved: Affirming Your Adventurous Heart

This Very Moment… This Is It… Stop… Smell the Roses… Give Thanks.

May 10, 2022
Tags: Are You Happier After Your Divorce?, Co-Parenting Today: A Failed Attempt, co-parenting with a narcissist, d1, Except for My Ex-wife, If I had gotten a 50/50 parenting schedule, Only You Can Make You Happy, Power and Control: The Custodial Parent, We're All Fine