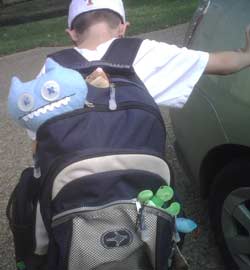 Men get a lot of stereotypical flack for not knowing how to be vulnerable and talk about their feelings. And I’d have to say, in our culture, that being a man with feelings can be hard. I’m one of those sensitive guys, and in many situations, I’ve had to learn to toughen up, be hard, unaffected by rage, bullshit, or attacks. Mostly this has happened during my tenure in corporate America. There’s no sense letting your feelings get hurt inside the big machine of business. You will be trodden under and rejected as soon as you show any of your soft unprotected emotions.

But in relationships, with some help, and a lot of time in counseling and men’s groups and drumming circle’s and retreats… I’ve learned to open up, crack the tough outer shell and let my sadness, fear, and anger show. However, a word of warning, when asking to go down this path with a man: It’s scary stuff. I’d recommend you go watch Brené Brown’s amazing TEDTalk on shame and the difference between men and women. (Brené Brown: Listening to Shame) If you don’t have time for that, here are a few of the lines that set up the premise for the rest of my post.

“Vulnerability is our most accurate measure of courage.”

For men, shame is “Do not be perceived as weak. When we reach out and be vulnerable we get the shit beat out of us.”

So I would characterize myself as a man who’s done a lot of work. Learning to soften our hearts, take off the armor, and share deeply the feelings going on inside us. And guess what? The corporate world doesn’t appreciate that at all. In fact, just the opposite, that vulnerability is a weakness in cube world and one hint of your emotional being in the trenches and you’ll be polishing your resume from home again soon. Business is a blood sport. The first sign of weakness is all the opening your colleague/enemies need to cut you to pieces

Now, this was BIG corporate management I’m talking about. But as I entered that world for the first time, during my marriage, two things begin to change in my approach to the world. I made deep friendships with several women who were able to listen to my moaning, and as veterans of this particular company were able to set me straight. It was almost as if, being a vulnerable man, I got access to the company of women who were struggling under the same stupid and angry culture. The good news is, one of those women was my hiring manager.

But my projects were unprotected once I left my one-on-one meetings with her. I was expected to execute and get things done. And in the course of the first few months, I began to learn the ropes. And I began to get hard. Except when dealing with her, who I could express myself to, I had to STFU and get it done.

In my marriage at the time, we experienced a bit of relief from the financial strains for the first time since 911 had crushed my self-employed business. So the money was a welcome comfort. But the hours and the commute were a bit harsh. I would kiss the kids and wife goodbye in the morning, drive an hour and hope from meeting to meeting all day. And then leave for my commute home around 6:30, often stopping at a grocery store or deli to bring home dinner.

But I was okay with this arrangement. I was living the dream. Happy wife. Happy kids. Good neighborhood. Great corporate gig with a highly visible company, what did I have to complain about?

As the first year in corporate-commute-life passed, this company did something they seem to do a lot. They reorganized the teams. And in one week I lost my manager, my full-sized cubicle (they were downsizing too) and most of my protection from the world of angry men. The worst part: I was placed under a man who I had challenged on several occasions from my previous position. It was clear from my first meeting with him, that it was not going to be one of trust or cooperation. In fact, no one could understand why this man was given a team again, as he had previously lost his managerial duties due to bad peer reviews. Nonetheless, there I was, being managed by my arch-nemesis.

Talk about learning to toughen up quickly. I was devastated to lose my confidant and friend. But I was more horrified to see how much animosity one man can bring to an entire team, not just me. He was sarcastic, unprepared, and cynical about every project we took on. I guess his response to corporate culture was to not give a shit and to let everyone know you didn’t give a shit.

Over the course of the first few weeks with the worst manager in the world, I began to harden in a different way. And the spillover was, I started hardening at home. I was fighting for my survival without air cover at work, and I was beginning to thrash a bit at home as I felt my security being threatened.

I started bringing my anger and defensiveness home with me. I probably stopped listening to my wife in an open way. And we both began to struggle to maintain our mutual trust. My job held the key for both of us in many ways. So we were both scared and vulnerable.

As I tried to open up about what a hard time I was having at work, she would freak out and get scared. As she freaked out and got scared I would start sharing less. And we learned how to negotiate and navigate this assholish guy I was becoming.

The death knell at my corporate job was sounded by the economic downturn in 2009. Along with over 50% of my team, I was given a six-month deal at the end of January. And I kissed my corporate tenure good-bye and returned home to re-tool and re-discover what I wanted to be when I grew up again.

But the economic threat was too high. My then-wife lost her part-time job the very day the severance was announced, and all hell began to break loose between us. I was unsympathetic and angry and blasting forward with what would become my next gig. And she was doing the mothering thing and terrified about how we were going to support our household. It was the worst of times.

And the deeper problem in the marriage was I had stopped listening to her concerns without getting defensive. And with my learned hardness still very much in play, I took to anger (not part of my DNA until my corporate stint) as a way of shutting down the objections and fears. We lost touch with one another over the course of several years, and we would have to both want to fight to get that trust back. That’s not what happened.

So, there is a lesson here. Be vulnerable, yes. But when you ask a man to open up and be vulnerable with you, be ready to be brought into his fear and shame as well. It was too much for us to navigate, even with counseling help, and we ended up getting a divorce. It didn’t have to go that way. But it’s taken me several years, post-divorce, to be ready to let the guard down and feel again.

The Benefits of a Happy Ex-Wife (Positive Divorce and CoParenting)

Divorce, Depression, and the Puzzlement of My Ex-wife