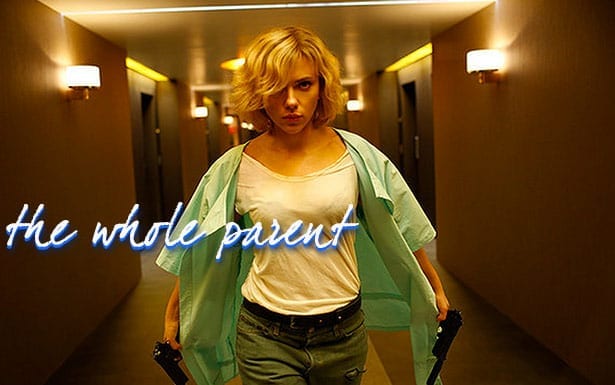 I am always lying.

I’m sorry. I don’t mean to, but it’s easier sometimes. And to confess even further, I am no longer married, so my wife is now my ex-wife, but that’s not the point. It might be part of the story, but it’s not the point. The point is, we all lie. For various reasons, with various results, we all tell shades of the truth or omit telling a truth that might cause friction with another person. It’s not an exclusive club. I’d bet you’re going to tell a few lies today. I am sure I will. Sorry.

Last week, I did something a bit worse. It was innocent, in my mind, but it was a lie. Several lies. And now I’m paying for the transgression. I hope the last lie doesn’t get found out or there will be even more hell to pay. Here’s the short story.

I took my son (13-going-on-18) to Lucy, an R-rated sci-fi thriller from the mastermind Luc Besson (director of The Fifth Element, one of the top greatest sci-fi movies of all-time) He had been asking about it since the previews came on. So we made a pact and a plan to go see it on opening day. It was a boy-to-day secret, our secret, and we mapped our plan carefully.

We were trying to stay under the radar of my mom, his grandmom. Earlier in the week, his sister had mentioned us wanting to go to an R-rated movie. She had a sit-down talk with me about responsibility and being-an-adult for my children. I was unmoved. We proceeded with the plan.

So in the lie, we told our family (his mom, his sister, and my mom) that we were going to the “ape movie.” We planned our escape and went to the movie. It was a right of passage. He was a little apprehensive by the R-rating and the potential gore at the beginning of the movie when Scarlett Johansson is kidnapped. But he assured me he could cover his eyes if it got too intense. It didn’t. It was intense. I looked away for a few seconds. But it was nothing either of us had not seen before.

In the end, Lucy is a great movie. Not a 10 like Blade Runner, The Matrix, or The Fifth Element, but a solid 8-out-of-10 stars. Both of us agreed it was a good movie. A very good movie. And we continued to talk about it, between ourselves, the next morning. The kids were leaving on a summer vacation to the beach with their mom, and off they went.

I sealed our pact, via text as I drove away after dropping them at his mom’s house. “Not a word.”

About thirty minutes later I get a text from his mom. “I am disappointed you didn’t tell me about the movie.”  Um… Crap.

Turns out, I was asking him to lie to his mom. That was never my intention, but it was the consequence. And my loving, honest, and open son told his mom we went to Lucy, not the “ape movie.”

Later, via text, as they were driving to the beach, he responded to my “What happened?” text with, “I didn’t want to lie.”

Ah, yes, and that’s the rub. I had lied. And in doing so I was asking him to lie. Not cool. I got it. And yesterday we talked about it. I apologized to him and said we’d do better including his mom in our plans next time. To her credit, she texted me later saying she wasn’t mad and understood us not wanting to deal with grandma on the issue. She understood and forgave me, in simple terms.

And yet the lie continues. See, if we tell his sister that we went to Lucy, my mom is next on the list. She will be used against us when my daughter is mad about something. It’s just kid stuff, but that’s the way it goes. And then my mom will give my son and me the lecture we’re really hoping to avoid.  And maybe she’s right, maybe I shouldn’t have taken my 13-year-old son to an R-rated movie. Period. Maybe she’s right.

Thinking back to my first adult-rated movie, I remember it well. I didn’t recall the title until I googled it, but I remembered the scene where Anne Margret screams, “Bingo” every time she has an orgasm. I’ll never forget it. I called it “looking for bingo” from then on. I was probably 13 when we saw it. My mom took me to the movie. I guess she didn’t have a sitter.

So my mom and I have a history of understanding about these things, sort of, if she remembered. But she wouldn’t so why bring it up. I’m just going to disagree with her and cause a big drama by contradicting her restriction. We were going to Lucy either way.

With my ex-wife, I should’ve given her a heads up. I don’t think she would’ve been opposed. But there was some other motivation I had for keeping it a dad-to-son secret. I think I was testing our bonds, or securing them, or doing a “boy thing.” I’m not quite sure, but I do know I was enjoying the little “our secret” thing. There was something that was just between us, that we were keeping from all the other people in our lives.

Of course, when he was with his mom and she asked him about the movie, he couldn’t lie. Or he was okay with throwing me under the bus. But I think the issue was really about lying to his mom. The choice I was setting him up for was either tell the truth or lie. He chose correctly and outed our secret and crushed our lie.

This is a microcosm of why we, as adults with full reasoning capacity and maturity, still choose to lie. From time to time it’s just easier.  Here’s a common example.

You’ve been invited to a party. It’s Friday night and you are bushed from work and you’d really rather get in your sweats and stay home binge-watching some HBO series. You text your friend, “Sorry, kid got sick at school. I can’t make it.”

No harm no foul, right?

Or is it wrong? Is there some slippery slope of lying, that once we’re comfortable lying to an innocent friend we’re halfway to infidelity or bank robbery? How about the little lies we used to tell the video store clerk about why our video was two weeks late? “Um… I’m so sorry, we went on vacation and my daughter left this in her VCR (remember those?). Lie. Lie. Lie. We are just hoping to get some leniency and a slightly lower late fee. Wrong? Lying?

In my marriage, there were deeper lies. But often they were just as benign, in my mind. Not in my wife’s mind. And perhaps she was right. Well, of course, she was right for her. It was her boundary that was being pushed and her trust that was being broken when I tried to explain why I had “forgotten” to pick up the lawnmower on the way home. A little lie. A little distraction. A little deception. I guess for someone who’s really really sensitive to this, it’s a breach of trust. And over time, even these little, white lies became false indicators of my lying.

Somehow, if I was lying about, or excluding from our discussions, that I had gotten a speeding ticket on the way home I was just a fraction of a lie away from cheating on her. Things escalated quickly on the speeding ticket thing. I hadn’t lied, had I? I had failed to tell her, sure, and I’d tried to just pay the ticket without a discussion, but of course, the $325 charge was going to show up on the cc statement later.

Of course, I would be caught. But I didn’t want to “get into it” with her right after it happened. I was still pissed off and a bit freaked out that I had gotten a ticket for failing to stop at a stop sign in the middle of suburbia, and I stopped. Of course, I had. The officer was just needing to fill out one more ticket and he could go back to his desk and Krispy Kremes at the station. Damn, was that a BIG LIE? Was that grounds for divorce? I guess if it represents an escalating pattern of lies and disappointments, it could easily be seen as a further failure on my part to be trustworthy and honest.

Well, of course, there were a lot bigger things that caused my divorce, but the exact same things are the reason I chose to keep Lucy a secret between me and my son. It’s also one of the ways I lied and failed to be honest with my (ex)wife. I’m glad I’m done with that level of scrutiny. And I hope my daughter doesn’t find out about Lucy and get my mom all riled up at us boys.

I will do better next time. I will include my ex-wife in any future R-rated excursions. At least, while my son is a minor… (grin) Seriously, I see how my lack of transparency with my wife caused my son to be in a very precarious situation. And my son made the right decision and in my next text to him, I absolved him of any guilt.

“You did the right thing. I was wrong in forgetting to tell your mom.”

“But let’s not tell your sister, okay?”

He was fine with that.

[Afterword:  Posts are tiny microcosms of our lives. I am learning all the time. As it stands this is my own take on my mistakes and failures. And where I go from here, is all about what’s next. That’s a future post. I am arriving here, at this moment and sharing it. Thanks for coming along with me on the journey. You are free to agree, disagree, voice your own disgust for my issues. Please, while you are doing this, look at your own.]

Dating Lessons: All This Swiping Feels a Bit Demeaning

Hold the Center in Love: Let’s Reset and Realign on Our Quest

December 2, 2019
Tags: father and sons, lying, lying to my ex-wife, lying to my wife, parenting a son, single parenting, why I lie