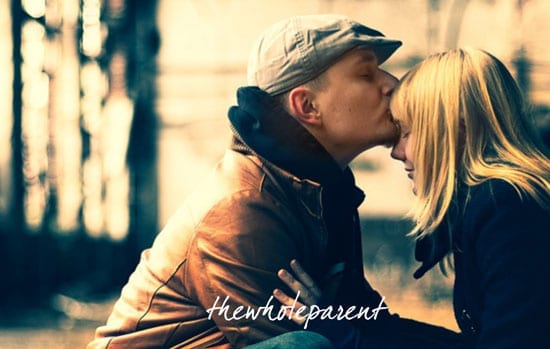 When you’re happily married you think life is all set. Then you have kids and the world gets even bigger and brighter. Then some tough times come along and muck up the happily ever after. And after much hand-wringing, and arguments the money is settled, the housing is decided upon, and dad (that’s me) is out on his own, to fend for himself, in the world of being a single dad with normal custody, that is to say, about 30%.

Some days I roll along like a happy man, a single dad working the program, doing his best. Other days, I fall below the “joy” quotient and I would really rather chill in my bed, watch movies, surf the net, and withdraw from all the activity. The holidays are some of the hardest times, for some reason.  And today, when I delivered my kids to my old house, my wife’s house, I was a bit bereft. Lonely. Aimless. Sad.

It’s not that there was anything that happened. In fact, just the opposite. My life is feeling pretty sweet, considering. But today, as I was getting back in my car, backing out of my old driveway, with no particular place to go, I felt the punch. A light poke in the solar plexus. A minor ache, that continued to echo through my body the rest of the afternoon. It’s the little things that get you.

Like little places you pass that remind you of a good moment. And we had a lot of good moments before we had all the bad moments. And today, eating lunch, I pulled into a place, not on purpose, that was one of the last good times I remember with my ex. She was working nearby, over six years ago, and we made plans to meet for lunch. It was in this golden moment, right after I’d had my vasectomy when we were trying to score the 40 ejaculates before we could have the well-earned unprotected sex. And for a month, my wife rediscovered her libido or something. She joked that it was more about hitting the goal. I was thrilled for the renewal and imagined the sex ahead would be even better.

After a divorce, you count back in your head, sometimes, the moments when you knew things were great, and the moments when you first sensed that things were spiraling out of control, in the wrong direction. And the little moments of magic can pop up, like today, and re-trigger the old hurt. And who, knows, maybe there was part of me that wanted to lean into the ache that was already taking root in my chest.

This last moment flashed before me today, as I was eating at this funky little Mexican restaurant, and there was a pang of sadness, a worry, will I ever have another moment, another love so good? The moment strikes at the heart of what ultimately blew us apart, and so this little scene of playful joy is not important, except for the feeling I still get when I remember it. We were happy, joyful in our quest for liberated sex again…

In good old days, this one time, we met at this restaurant, and in the parking lot around to the side, my wife gave me a quickie blow job, in the silliest and playful way. We were like kids, getting away with something terribly forbidden. Today, the flicker of that moment, showed two people playing at sex, enjoying the raucous play, and getting away with a little secret in the middle of the workday.

I guess the deeper part of the ache is the lack of spontaneous or playful sex I’ve had in the years since that peak. When the condoms came off the sex continued at ever slowing pace. It seems the “goal” really was part of the fun for my then-wife. I tried to rekindle whatever I could from my end, but things continued to fade. She became less willing to even be close, much less have sex.

Sex is not everything, but it’s important. As our sex life continued to fade, I continued to be the interested party who was given the challenge to “ask differently” and “keep the house clean” and “pay all the bills.” It was as if there were a string of conditions for intimacy that became more of an alchemical mixture rather than anything I could predict or influence. Why is it, that this stereotype is so common? Men continue to want sex. Women, as we now know, get bored within monogamous relationships. Um, no shit. Men do too, it’s just we’re more willing to work on the monotony with more intention.

In the last year of my marriage, I am certain we could easily go for a month at a stretch without having sex. And it’s not that I wasn’t asking, cajoling, seeing if she wanted a massage. Her switch flipped off and stayed off. There was not much I could do about it. As I was making lists of things I could do to entice her, she was becoming more distant.

In a recent post by a friend, on what to get your husband for Christmas, I was saddened that the tone, even from this psychologist, was so one-sided. Here’s the list.

This is a common theme. The “how sex used to be” theme. In a Facebook post, Dr. Psych Mom poses a theoretical question from a reader.

“Why his wife last 69ed before they had kids, 12 years ago. Then i can answer, with solemnity:

My friend, there is probably no amount of doing the chores that is going to get you that again. It’s one of those things that women only do when they are young and uninhibited, like dyeing their hair purple, or dancing on top of the bar.

Now if you took care of the kids for an entire weekend while she visited the friend with whom she used to dye her hair purple and dance on top of the bar….. then maybe.
No promises.”

But that’s the point. I was doing the extra things. I was offering her “girl’s night out.” I was taking care of putting the kids to bed so she could get in the mood. Except, more often than not, she was falling asleep or working on a project when I came out of the kid’s room.

We all have to work on our sexual communication. If it gets off, we need to chat about it. If it REALLY get’s off, we need to bring it front-and-center in therapy. Somehow I was letting our sexual disconnect be “okay.” We went to therapy, but we were usually dealing with some “crisis” that I didn’t really see as a crisis. And I’m sure, that was the problem. I wanted closeness, and maybe even sex. She wanted all the worries and struggles of the day to be gone.

Sure men have an easier time getting turned on, and women take some warming up. But women also have to be open to suggestion, or it’s a non-starter no matter how you phrase it, or what technique you use to rub her feet. Needless to say, it wasn’t the sex that caused us to get a divorce, but the loss of sexual connection sure indicated that something had gotten out of balance. Unfortunately, I was never able to regain that balance with my then-wife. And as the emotional aspects of our relationship got more complicated, the sex simply dried up completely.

So dear, Dr. Psych, what is a man in a committed relationship, who *IS* doing all the extra things and still getting the cold shoulder supposed to do? Move on?

More from The Positive Divorce section:

Reference: What To Get Your Husband For Christmas. And None of The Suggestions Are From Brookstone – Dr. Psych Mom

Is It Love We’re After? Looking for a Long-term Relationship

How Am I a Suicide Statistic? Divorced Dads Are High Risk

July 2, 2018
Tags: divorce lessons, divorce with kids, how divorce happens, how kids change a marriage, how marriage breaks down, i still gave my best, my divorce, she was checking out, we're all tired