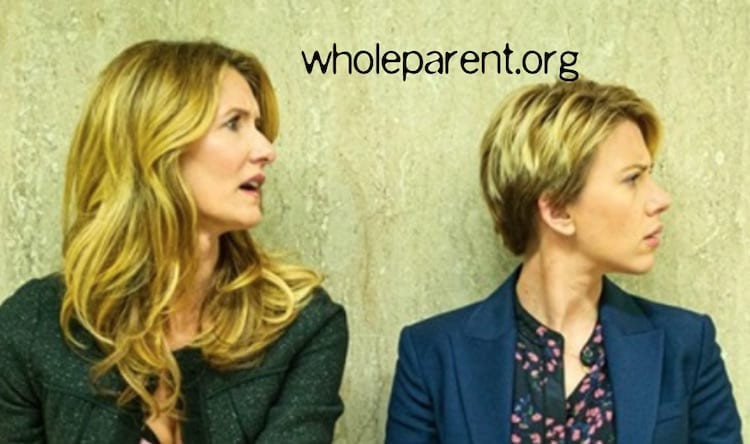 Contrary to this article on Fatherly, claiming the tide is changing in favor of men who ask a judge for 50/50 custody and visitation rights, the average divorce awards the mom the all-powerful custodial role over 80% of the time, nationwide. 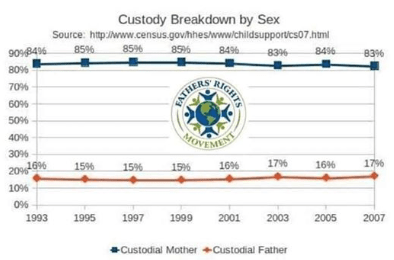 Here’s the subhead of the article:

“If the dad comes in now and says ‘I want more time with my kid,’ courts are going to do what they can to make it happen. So you’re seeing this major, major shift.”

I’m not sure where this article is getting it’s new optimism for dads, but I’m not aware of a renewed interest of the courts to do anything but ram the Standard Possession Order down on the father, and award the mom the custodial parent role while assigning her the maximum child support judgment possible. In fact, that idea is in the federal statute that governs child support.

In most states across our great country, there is an entire system (80% of divorces) that is geared to award the moms getting 70% of their kids’ time while dads get assigned the child support payment and the powerless non-custodial parent role. This system is supported and funded by US family law statute called Title IV-D. In today’s divorce world there is already a bias against dads. Here’s the language from our US Family Code:

Sec. 201.107. STATE AND FEDERAL FUNDS. (a) The office of court administration may contract with the Title IV-D agency for available state and federal funds under Title IV-D and may employ personnel needed to implement and administer this subchapter. An associate judge, a court monitor for each associate judge, and other personnel appointed under this subchapter are state employees for all purposes, including accrual of leave time, insurance benefits, retirement benefits, and travel regulations.

(b) The presiding judges of the administrative judicial regions, state agencies, and counties may contract with the Title IV-D agency for available federal funds under Title IV-D to reimburse costs and salaries associated with associate judges, court monitors, and personnel appointed under this subchapter and may also use available state funds and public or private grants.

(c) The presiding judges and the Title IV-D agency shall act and are authorized to take any action necessary to maximize the amount of federal funds available under the Title IV-D program.

I’m not sure this language is ever going to change. The states have too much money at stake to start awarding 50/50 divorces.

While this article cites some optimistic utopian family court, my advice to a dad who would like to share the custody of his children 50/50 is that you are going to have to lawyer up and fight. The movie Marriage Story gives a great example of how the modern divorce war is fought. One parent, usually the day, is willing to cooperate and be nice. One parent decides to hire a bulldog lawyer who convinces their client that “going for it” is in the best interest of the children. Watch the movie, and observe how the mom’s lawyer brings a somewhat collaborative mother around to the “go for it” mentality.

At first, Adam Driver’s dad hires a compassionate attorney, played by Alan Alda. That lawyer speaks the truth. He reasons with the bulldog lawyer played by Laura Dern. But as the fight unfolds, the dad has to hire a bulldog lawyer of his own, with money he doesn’t have yet, to fight for an equitable deal. The mom’s lawyer justifies her aggressive approach, saying, “I want you to listen to me. What you’re doing is an act of hope. You’re saying, ‘I want something better for myself'”

Mom, played by Scarlette Johannsen responds, “I don’t want to be too aggressive. I want to stay friends.”

Her lawyer softens for a split second, “We’ll do it as gently as possible.”

Here’s part of the opening paragraph of the Fatherly article.

Shifting societal gender norms have guided the courts to a more neutral perspective toward the rights of divorced fathers. Parents are more mindful of the effects of divorce on children. Joint custody is more regular. Fathers are seen more as equal parents in the eyes of divorce court.

This enlighteningly wrong information comes from a new book by a divorce lawyer, Rules of Divorce: 12 Secrets to Protecting Your Wealth, Health, and Happiness. Um, sorry, but that’s not a playbook for fairness. And I don’t think her answers to this Q and A will convince you of her “major shift” perspective as it relates to dads getting 50/50 custody. Her book title makes it seem a bit more like an advertisement for her services as a lawyer. She might be telling men they’re going to get a fair shake, so they hire her to represent them. She’s not advocating skipping legal representation and going as a couple to ask for 50/50 parenting. Nope, she’d like you to hire her, so you can get this better deal.

Some of this divorce attorney’s answers feel like complete lies.

“As more and more women enter the workforce, and as more and more fathers become more involved than they used to in daily childrearing, you’re really seeing a shift in custody arrangements.”

Great idea, and I agree more moms are having to work full-time to make certain lifestyle choices for their families. But the next statement is complete BS.

It used to be, for the most part, there was pretty much presumption that the mom was going to get custody, and the dad was going to have the every-other-weekend/ Wednesday-dinner-type-thing. And that’s just really become very much a thing of the past.

I’d say that 10 years ago, if I had a father walk into my office and say he wanted 50/50 custody, I would joke “Where are the bruises from where she beats your kid?” And now, it’s really shifted. Now, the Dad comes in and says I want 50/50 custody, I say “Great, let’s go for it.”

This joke is not a joke. “Where are the bruises from where she beats your kid?” This is still how the courts see dads vs. moms in family courts. (And this bad joke shows you just how compassionate this female divorce attorney is. Nice joke, counselor!) Unless she is a BAD mom, she is going to get her divorce package. And more than likely it’s the divorce attorney who’s saying, “Great, let’s go for it.” This decision to go to war is going to cost both parents (and ultimately the kids) in the neighborhood of $100,000 to represent both sides. There is no “go for it” that’s not a legal battle and this attorney knows it.

What she is saying is, if you lawyer up, with the right lawyer (her, perhaps) you have a pretty good chance of scoring 50/50 custody against your wife, who is going for the more acceptable 70/30 custody arrangement, disguised and labeled as the Standard Possession Order.

And here’s the truth behind this woman’s divorce for dad’s premise.

So, should Dads who are considering, or going through, divorce be less concerned about losing access to their kids today, versus 10 years ago?

I don’t know if I would be that general about it, because, look, there’s still great concern about it. But I think that the message is, if they want more time with their kids, the tides are turning for them to be able to do that, if that’s what they want.

Call me cynical, but this sounds like a sales pitch to fathers. “The tides are turning for them to be able to do that…” With the help of strong and expensive legal representation. Oh, and factor in the typical situation where the father’s income is paying for the attorneys on both sides. What prevents a mom from lawyering-up? And what are the options for a dad who wants 50/50 shared parenting rights for his kids? Regardless of what this article and quoted divorce lawyer says, the advice is still “lawyer-up” and be prepared to pay for your equal parenting deal.

How Can We Change Divorce?

I’ve written something called The Pre-Natal Agreement that asks both potential parents to agree to 50/50 parenting regardless of their future as a couple. Their future as parents is a relationship that’s going to last the rest of their lives. My belief is moms and dads should agree that they will both ask for 50/50 custody in the case of a divorce. My agreement is more of a set of vows. I have not written a legally binding contract, like a pre-nuptial, that governs the money in the case of the divorce. I have written an agreement that governs the promise between the two parents to share the love and parenting of their children in a balanced way for the rest of their lives.

The article from Fatherly: Divorce for Men Has Changed a Lot in the Past Decade, Especially for Fathers

Episode 4: “Something Is Emerging.” A Loving Conversation with Mark Greene

Find Me Somebody to Love: Aspiring Towards a New Relationship

Dating, Sex & the Single Parent: The New Rules of Dating