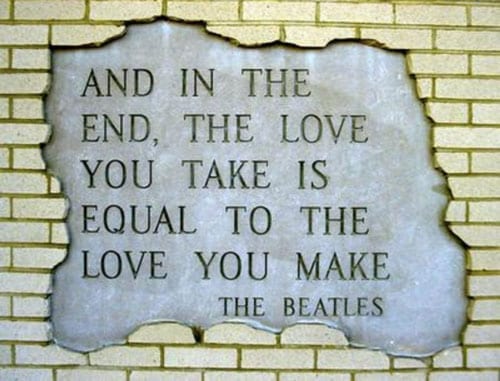 I’ve recently started the path to full forgiveness of my ex-wife, but it’s not always an easy road. Still, even in disagreements, I try to see her as “doing her best.” And occasionally I will use those tired old wedding vows and transform them into a kind of mantra.

“To have and to hold blameless till death do you part.”

Or course the hold, after divorce, takes on new meaning, but the vow can remain unbroken, even in divorce. The seeds of what ripped us apart were there at the outset of our relationship. If I had been in a less damaged place from my previous marriage, I might have been able to identify them, “might” have been able to resist the magnetic pull I felt towards this beautiful high school classmate, and I might have made a different decision. But I didn’t.

Part of my work in recovery from this divorce has been to take my own inventory and understand the emotional mechanics that were at play during my courtship and marriage to my last wife. And as I try and use that information to move forward with a new healthier relationship, next time, I can sometimes get caught up in the “if I’d have known…” what-ifs. And of course, the logical conclusion after I churn a bit on these tidbits is BUT I HAVE THESE GREAT KIDS.

While changing my past with my ex-wife is not possible. Gratitude and appreciation for our children is infinitely possible. And the love of those children is the gateway to forgiving your ex. At least, it is for me.

Of all the emotions so far, anger has been the toughest for me to grapple with. Initially, I was too complacent, compliant, depressed, hurt to really access my anger. It’s okay to be angry. It’s really okay to be angry. The anger can be an energy source for the work ahead. In my case, with a raging alcoholic father, my access to anger has always been difficult. And maybe in my marriage, my passivity, or lack of anger, allowed our relationship careen off into places that were not healthy.

In my family of origin my father’s anger dominated everything. His rage was legendary. There was no room in my father’s house for anyone else’s anger. We all learned to comply. We all sublimated our own anger and hurt at being dominated in such an unjust manner. But we shut up. No good ever came of getting angry back. We saw that demonstrated first hand by my oldest sister, who was a lightning rod, during the emerging sixties, for my father’s horrific tirades.

I learned that anger was bad. And after my father exited the scene around my 6th birthday I was raised by three women who had become skilled in the art of manipulation though indirect subversion. Even today, I suffer occasionally from not being able to access my anger about an injustice that I would like to stand up to but don’t.

And this happened in my marriage. I didn’t stand up for my own essential needs. I avoided conflict to the point of lying about silly little things, that would later undermine my partner’s trust. (Example: getting a speeding ticket and not telling her or paying it.)

Fortunately, this pause has given me time to rediscover healthy anger. And my ex-wife, naturally, has given me opportunities to access it. Divorce might be cooperative and collaborative, but there are going to be frictions.

And one of the things I’m grateful for in this pause is my rediscovery of healthy anger.

And this is where my newly found anger skills are a double-edged sword. On the one side, I am standing up after divorce, for things I should have stood up for while still married. The converse edge is trying to understand how my anger is my own, and that she is not to blame for my disappointments or resentments.

To have and to hold blameless. It’s a big task.

But if I move into my next relationship before figuring it out, don’t you think I would soon begin repeating the same behaviors that got me divorced in the first place?

There are a number of lessons from Alcoholics Anonymous that I started learning when I began going to ACOA and Al-Anon meetings. The first was not taking another person’s inventory. We can only be responsible for our own actions and responses. If we begin to focus on the other person’s faults and problems we quickly find ourselves back at blame and shame, first of the other person, but ultimately of ourselves.

So in walking away from my marriage, I am continuing to learn, that this is MY SHIT. Whatever it is I’m dealing with at the moment, she is not the cause nor the cure of the situation. I am the only one who can take action on my behalf. So letting go of her requires me to let go of the blame I can still try and pin on her. Things like, it was her idea, it was her distrust, it was…

That’s the only real answer. And in the next relationship, if I can learn from this pause and reset, I will build healthier structures for communication and meeting my own needs as well as the needs of my partner.

Another part of the AA program that I use almost daily, is the serenity prayer. Each line holds a key to our release from whatever it is that is keeping us unhappy. (For alcoholics it’s alcohol, for me, it’s emotional depression.) And if we listen to each line as we say it to ourselves, we can allow the reset to happen in our lives.

Divorced with Children: It Does Get Better

A New Language of Sex: Embarking on the Learning Together