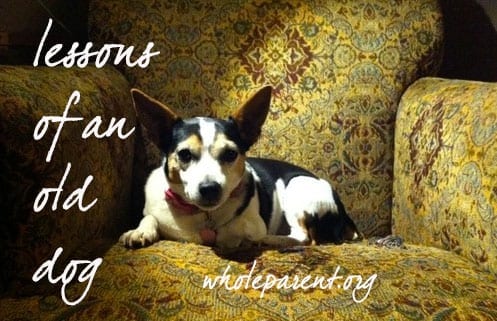 This is King Scrambles

This lovely old gentleman saw me through the worst of my divorce. In fact, as he showed up in my young family’s life, our marriage was coming off the rails.

He’s completely deaf and mostly blind. He was driving my ex-wife crazy to the point of her suggesting end-of-life strategies. But he’s just an old farty, blind, deaf, dog that I love. I love him anyway. I carry him up the stairs every night to put him in the warmer bathroom for safe keeping. He’s frail and a bit disoriented, but I have high hopes that his bounding spirit will return.

I lost my animals almost a year ago when I had to sell my house under duress. And my ex-wife was thankfully, willing to take back the old farty dog and my new addition, a cat. She wasn’t all that happy about it. And she put some conditions around their boarding, but she did me a great service by letting me keep them in the family. And today I will recover the cat as well.

However, this morning, watching my old family dog wander aimlessly and blind around the backyard, I was struck by some of my emotional reactions to his presence. He’s not doing all that well. I think the year with the big-young dog was hard on him. And as my ex-wife became more irritated and irritable about the situation, this little guy was seen as a chore and not a gift. I don’t care how many times I have to clean poop and pee off the floor of my house, he’s still family. Thankfully, he made it through the transition and has been relaxing in his backyard yard, sans competitors, for almost a week.

He seems to be thriving, even as his frail condition becomes more obvious. But I am also noticing my reaction towards care taking. I would do almost anything to support and love this dog. And as I watch him wandering the back yard I often go out and pick him up, talk to him, and give him some hugs. His milky eyes turn towards me and back away, almost as if he’s ashamed of his blindness. And even if he can’t hear me, or see me very well, I know he recalls our loving relationship. Whatever it takes.

That was my approach to marriage as well. When I was farting and shitting a bit too much, my then-wife took up the lion’s share of parenting and household management. And we knew it would swing back around. And there were plenty of periods where I was the hyper-parent and responsible partner. And even as I grew weary of the duties from time to time, there was never any push back from me.

The year my son broke his leg was a good example. Or the year my then-wife broke her wrist requiring major reconstructive surgery… She couldn’t do anything for herself. And the months of early recovery were hellacious. And somehow strengthening at the same time. Even as I complained inside about all the chores and kid runs I had to make, I was outwardly and spiritually happy to be of-service. And it didn’t wear me out or diminish my love overall. All of these trials seemed to strengthen the bond, for me.

“We made it through the Winter,” we used to say, as the spring months broke the metaphorical grip on our warm hearts.

As I watch my dog in the back yard today, I remember wishing back then that I had some way of protecting my kids and my then-wife from all the harmful things the might happen. I was struck occasionally with a sad moment when dropping the kids at the fantastic daycare in the mornings on the way to work. I wanted to stay there with them. I wanted to push my daughter on the swing all afternoon. I wanted to have the same kid time my then-wife had. But I moved along after a few pushes on the swing, “Come on, Daddy, one more!”

Today I see how my desire to go out and cuddle my old ailing pup is the same emotional response. We want to comfort all of our tribe members when they are hurting. Even if we don’t have any idea what’s going on in their hearts, we still project our own stuff on to them, and want to comfort OUR discomfort by comforting them. That’s called codependency.

With kids, it’s a given. They are dependent on you. And without healthy codependency, they would probably starve and go feral. So we interconnect, we interrelate.  And as parents, we commingle our happiness with theirs. Even as I watched the kids rush off to greet their “daily” friends I was saddened to be left behind. And even though my daughter complained every morning as I left, “One more, please,” I knew the responsible thing, the adult thing, was to do the work that made the money that provided the food and shelter part of our family living.

My dog is probably not feeling any pain in the back yard. Sure he looks around as if he’s surveying the landscape. And yes, he would like a continuous stream of wet dog food to magically appear. But for the most part, his life now consists of wandering, eating, pooping, and sleeping.  He does all of them just fine. And it is my emotional need that fuels my compassionate response to him. I’m guessing he’s a bit confused when I pick him up these days. It’s been a while since we had this much contact. And for him, this has meant very little contact over all, since he was one of three pets in a house of busy kids and an overstressed single mom.

As the marriage wore on, my then-wife, somehow grew weary of the constant negotiation and navigation of parenting. She decided at some point, that going it alone was a better option for her and the kids. I think maybe she had the same overall compassion for me that she had for the farty old dog. As his maintenance grew into a chore, she was ready to put him to sleep rather than deal with it. The real story behind the dog’s issues was more about winter weather and freezing rain that kept him from going outside to do his business.

Today he has the same problems but he’s got me again, to nurture and provide comfortable transportation and living quarters. And yes, he needs some fattening up. And while I’m hopeful at his recovery back to a bouncy and hype old blind dog, I’m also aware that his current life is happier than it was a week ago. And next week, who knows.

For the last years of his life, my buddy will do whatever he does as an old dog. I will watch him zigzagging around the back yard and try to remain happy for him rather than sad for him. I will love on him as much as I can. And I’ll be aware of how my emotional attachments and complaints are mine alone. He’s a dog.

As a parent, I know separation has to happen. My kids are now 12 and 14 and the process has begun. I am no longer the most awesome dad of all time. I’m ignored, complained at, and teased. It’s okay. It’s part of the plan. My old dog is still reminding me of how the process works.

I guess, somehow, I’m an old farty dog to my kids, and they love me anyway. (grin)

more from The Whole Parent

Marriage Stories: “Another In a Long Series of Disappointments,” she Joked.

How My Bipolar Depression Showed Up in High School