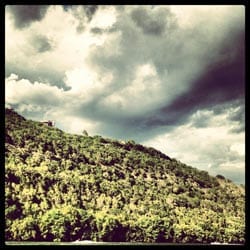 Once my then-wife decided she was done with therapy and would rather divorce me than continue trying to “work things out,” my first reaction was to run. I was angry and I wanted to show her just how bad it would be without me. I wanted her to feel the immediate loss of her decision.

In my case, the revelation came in a therapy session when I asked her, “Have you already been to see a lawyer?”

She looked ashamed and angry all in one second as she said, “Yes.”

I wanted to snap. I wanted to yell. I wanted to break down and jump off a bridge. I sat there and put my head in my hands. I didn’t cry. Not then. Both she and the therapist suggested that I move out and give her and the kids some time out from under the stress of the recent month.

“No way.” I regained my center of gravity. “If you’re in so much pain you can move out, or take a vacation, go visit your family.”

And over the next week I continued stating my position, “The kids are two months from finishing school. If we’re getting a divorce, fine, but there’s plenty of work to be done between now and then. And I don’t want to drop this on our kids before they are out of school.”

Over the last few years I have come to understand, that though my ex-wife is who made the first move and actually asked for the divorce, I had been voicing my dissatisfaction with the current state of our relationship for several months. It was a mutual decision to be in couple’s therapy for the second time. And I have her to thank for releasing us from a situation that had become unmanageable and unrecoverable.

It’s hard to imagine having those thoughts as I was hit with the shock of emotion that unraveled over the next two months. And while both she and my therapist advised repeatedly that I was being unreasonable, I was certain that letting our kids finish 2nd and 4th grade before we adults ripped our unit into two. It was the elementary school counselor who explained to my then-wife how it would really be best if we could wait until the summer. She’d seen so many divorces devastate kids academic and social confidence.

So we agreed to be roommates. And for a few painful months, we alternated between sleeping on the couch and the family bed while we continued to go through the motions of parenting our two kids. And the thing to remember is that role and those motions are the part of the relationship that never ends.

Even divorced you have to keep discussing money, healthcare, logistics from school, carpooling to sporting events. There’s no leaving the relationship with your kids and thus from the moment you understand that you are getting a divorce from their other parent, you begin to form the next phase of your relationship: co-parenting.

But it’s a bit of a journey to get there. If you rush into the fury of divorce and start slashing and burning, you’re likely to damage yourself and everyone around you. The anger will come, and you must find OTHER ways of letting it out. Rage and vindictive behaviors towards your soon-to-be-ex will ultimately backfire.

In our case I began to drop into a depression over the course of the next two months, as I neared the precipice that I was still, somehow, hoping to avoid. I vacillated between charming “of course I’ll do it’ husband to “I hate you and am going to let you see what an ass I can be” future ex. But inside I was devastated. I was becoming more and more haunted by the trauma of my parent’s divorce.

In our logical fashion, my still-wife and I engaged a family therapist who specialized in helping parents set up healthy parenting plans. And we marched towards June together in our wobbly orbits. As the kids became more excited about Summer and the end-of-the-year parties, I was going to weekly meetings to divide up their lives.

After that first session, when it was revealed that my then-wife had already been to see a lawyer, I called my old men’s therapist for an emergency session. I met him at his house the next morning and upon seeing him and being hugged, I wept. And he just held me, like a father might. And as I pulled apart what I was feeling, all I could think about was how I was going to tell the kids.

My 5 year-old emotional memory of my parent’s divorce killed most of the joy in my life at the time it happened. I was sinking into that memory and allowing myself to feel the loss and the eventual death of my father. I couldn’t imagine putting my kids, my beautiful and innocent kids, through such a horrible tragedy.

Of course, what I understood once I felt that grief was that I was nothing like my father. And this divorce would be nothing like what I experienced. And with the help of my old friend and therapist, I girded up my armor to do battle for the health and well-being of my kids. I reaffirmed my decision to stay in the house until school was out. And I also committed to directing as much of my anger as possible to him and away from my ex-to-be.

When it initially came down, I really did want to run away. And then I wanted to fight. But the fight was about my own emotional hurt and not “what was best for the kids.” The situation sucks. The divorce is going to happen. Try and slow down. Get a person and place where you can voice and process the anger, outside of the marriage, and not with the marriage counselor either, your wife doesn’t need it to be part of that process.

There will be time for anger. There will be moments when anger is the only way you can find to stand up for what you believe to be right. But the rest is up to you.

In my case, it was important to me that my kids not be blindsided while they were still in school. (That’s how my parent’s divorce was revealed to me.) And the mechanics of divorce were going to take some time, so let’s just calm down and get to work on the next steps. And once my then-wife got onboard with that idea, we weathered the next two months with very little drama, on the outside. The devastation was starting to take its toll inside me. But I wouldn’t be able to listen or feel those feelings until I made it out the other side of the process. So… On to June, we sailed in our leaky family boat.

Catching Up On My 11-Year Love Quest: Girlfriend Next

What Good Is Love If…