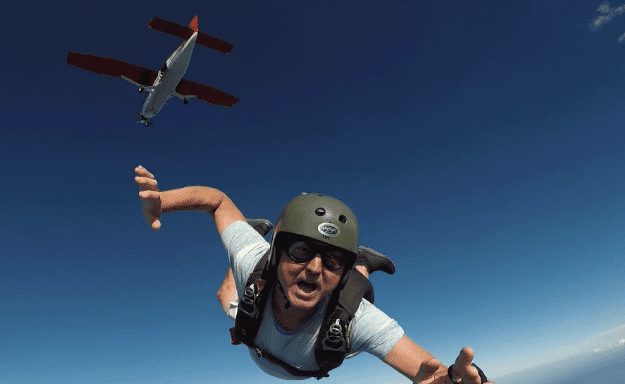 All of them have their thrills. All of them have their dangers. And two of the three are opt-in activities. You choose scuba and skydiving. For the most part, you don’t choose divorce, divorce rushes up and confronts you at some point in your marriage and you either give in and give up, or you knuckle down and get cracking on what’s not working.

In my marriage, I was very much the “let’s work this shit out” guy. I was pro-therapy, pro-alone-time, pro-self-fulfillment, for both of us. I was pro-marriage. My then-wife made different choices. She was not all that gung-ho about couples therapy. She used the word “cynical” to describe her attitude towards our marriage. I hustled on in my belief that honesty and hard work would pay off, would keep my family together for the kids. I mean, I was a child of a very nasty divorce, and I didn’t want to go that route, no matter what.

In the no-matter-what department, I agreed to a negotiated divorce from my wife. I agreed to not get my own attorney (not specifically part of the official “cooperative divorce” program). I agreed to work with an accountant to divide up our joint assets fairly. I agreed to meet with a parenting counselor to devise our future parenting plan as single parents of two remarkable kids. And I agreed that everything I did or said from that point on would be “in the best interest of the kids.” Well, I didn’t really agree to the “said” part, but my actions were going to be dictated by our mutual interest in making the divorce as painless for the kids as possible.

What I did not know at the time was, my then-wife had mapped things out ahead of time. She knew exactly what to ask for, how to play me, and what to do so that I would be compelled to give her the divorce she wanted. The exact divorce she wanted.

A Marriage in Crisis

My then-wife was the excel spreadsheet master and we budgeted everything, even when we had money we budgeted. It got harder when the money got tight. And it got almost impossible when she decided to take a year, the last year of our marriage, to “find herself.” She didn’t know what she wanted to do with the rest of her career. “That’s fine honey,” I would say, several times during our marriage, “You go ahead and quit the job. I’ll stay here at my job and you can take some time to figure out what you want to do next.”

I was that kind of partner. “We can figure this out. Do what you need.”

That was the approach I took to getting a divorce as well. And it did not serve me well. What I did not take into account was that my “planning oriented” wife had already drawn out the roadmap for how things would go in the divorce. She wanted the house, she wanted the majority of the time with the kids, and she wanted me to leave her and the kids as soon as possible.

In the therapist’s office, she complained about how difficult I had become. How hard it was for her. How she wasn’t sleeping well. How there was too much stress between us. The therapist looked at me with concern. “Why won’t you just move out and give your family some well-deserved peace?”

Well, it was 6 weeks before the end of the school year. Our kids were in 3rd grade (daughter) and 5th grade (son). I was furious. “No way am I going to blow up my kids’ school year because you’ve decided you want a divorce.”

Both my then-wife and the therapist were surprised at my rage. I was clear in my commitment. “We’ve been doing ‘roommates’ for 6 months, we can do it for another 6 weeks until the kids are done with school.”

We didn’t really reach an agreement on this until a few days later when my then-wife talked to the kid’s guidance counselor at the elementary school. Then, she heard the message. “It’d be a lot easier on the kids if they didn’t have to go through the emotional crisis while they were still in school. Wait until the summer.”

We waited. I stayed in the house. We slept in different rooms. We pretended to be together during the “kid time” but it was strained and artificial. But we kept it together while our kids finished their school year. We kept them out of the counselor’s office, crying about the divorce. We kept it together for a bit longer, while we began to sort out the details, the business side, of getting a divorce.

Divorce is a crisis for everyone. As the family unit comes apart each member has to find their own happy places where the family joy is now lost. You can’t take the pain away. Everyone is going to feel sorrow, loss, and some disorientation. I think my then-wife’s pre-planning gave her a significant advantage in setting her sites on the next chapter of her life, while I was still sorting through the wreckage of “what the hell happened.”

Waiting Until the Kids Are Out of School

As it turned out, the 6 weeks together was hard on me. I’m not sure my kids or my then-wife experienced the same loss that I making me depressed. My usually optimistic outlook on life was beginning to sour. I did not want the divorce. I did not want to lose my kids. My dad-time was about to be cut to 1/3 and I was already feeling the loss. I think my then-wife was planning and writing out budgets for the next few family vacations, without a dad. I think she was confident in her upcoming WIN. I think she knew I would not fight her about the divorce. I think she asked for a collaborative divorce as a way to assure her success.

Now, I don’t want to paint a picture that my then-wife was a bad person. I do believe she was acting in what she saw as the “best interest of the children.” But I’d add a bit more data to that overused phrase. I think the real message of today’s family courts is, “In the best interest of the kids and the mom.” Because I was left to fend for myself after the divorce. I needed a new place to live. I needed a new job with more money so I could afford even an apartment after the child support payment each month. I needed to start again, from scratch. And my kids and my ex-wife spent the summer in the same house, with the same routines, and the same loving environment, just without me.

I do believe kids come first. But I also believe that dads are just as important as moms in the parenting equation. I think the modern research now shows that dads provide just as much nurturing and just as much security as moms. Our courts tend to push everyone towards the Standard Possession Order, and that’s just a bad deal for the “non-custodial” parent.

Dads Are Equally Important in a Child’s Life

To the dads who are facing the prospect of divorce: If you parent 50/50 like we did, you should divorce 50/50 and co-parent 50/50. That means sharing in the ups and downs equally. As it stands today, my ex-wife has felt very little of my economic struggles. She’s stayed in the house. Refinanced several times to get more cash. She’s even remarried and found a man who appears to be more “doing things for you” focused than I was. I’m happy for her. I’m happy that my kids got to stay in the house and not float around in rentals and apartments like me.

I wanted 50/50 parenting. Not because of the money, but because that’s how we’d raised our kids thus far, that’s how we joined in our commitment to have kids in the first place. As long as the laws are written to give the mom the money and the time with the kids, the dads are going to have to fight for their rights to be equally valued in the post-marriage parenting plans.

Divorce, Scuba, Skydiving. Well, now I can have it all. Scary, but thrilling to see what adventures are ahead for me and my family.

A Self-help Coaching Map: Aligning Activities with Your Intentions

The Approaching Storm Before the Divorce: It Wasn’t One Thing