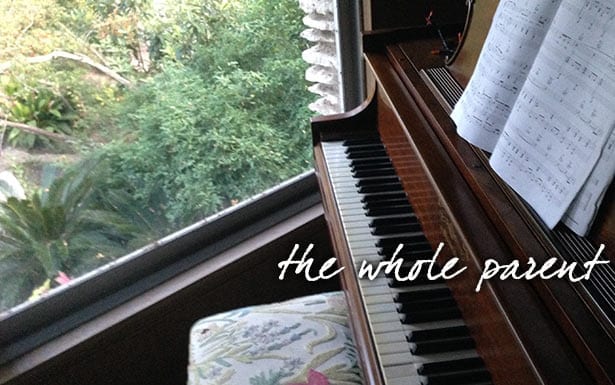 Nobody is going to hold your dream for you.

I could tell my then-wife that the next high-paying gig was right around the corner, and I could believe it. But after a few misses, she began to doubt my optimism. And as she doubted my optimism about gainful work, she also began to doubt my optimism about the marriage. Oh, we tried to support each other’s dream. We did our best to encourage, champion, cheerlead, and provide loving support, but after a while, when the results just don’t add up, we all begin to doubt.

So how can we keep faith in our own plans and dreams, even with the closest people around us are beginning to voice their dissent?

As I entered my second year at the big corporate job I began to get more tired and hopeless about my future. I was doing everything I could think of to support myself while I was on the job and during my hour-each-way commute. We got a Prius so we’d use less gas, spend a bit more of the money I was making. I started getting my haircut in this next town and sort of made my corporate base my second home base. I had an optometrist out there. I used the gym on-site. I tried to eat better at the cafeteria.

But I was slipping. My blood pressure was up, I’d gained about 15 pounds during the first harrowing year. And every day I noticed more and more EMS ambulances in front of various campus buildings. Over lunch, I was chatting with a co-worker about the stress. “At least once a week, EMS is called to one of our buildings. Usually, it’s a heart attack.” WTF? I could feel what she was talking about in my gut. My growing gut. The stress of this high-paying, high-pressure job was killing a lot of people. “And over 50% of people with first-time heart attacks die.” Now, I have no idea if she was right about that one, but it scared the crap out of me. I knew I couldn’t stay in this corporate crock pot of stress. It was killing me.

I soldiered on for another 9 months before the massive US economic downturn forced large-scale layoffs. At first, we thought the ones invited to the “I’m sorry” room were the unlucky ones. Today, I’m pretty sure that my 6-month severance might have saved my life, even as it started the collapse of my marriage.

It wasn’t the layoff that started the spiraling breakdown of my marriage. In fact, I was pretty happy to have full-pay and benefits for six months while I was trying to reorient to something that might be healthier for me and my family. My then-wife, however, didn’t see things the same. She was terrified. She was anxious for me to replace the job ASAP so we could continue our current lifestyle. I needed a pause. Something in the next three months began to shift our dreams away from each other rather than towards each other.

An aside: I get it, when a new potential date looks at me and sees a man who’s packing some extra weight. She can’t possibly see what’s going on with me. She doesn’t have the concept of the me I am becoming. And she’s not really interested in learning about my plans and dreams or hearing my romantic spiel. That’s okay, she doesn’t have all the information, she can’t possibly see beyond my weight to the amazing person that I am. And, to be fair, I have a range of fitness that I’m looking towards as well.

So my then-wife couldn’t hold the dream for me. She didn’t see what I had in mind. Even when I told her what I was planning, it wasn’t what she wanted to hear. It might not have matched up with her dream, and her plans. Where we had often held each other’s dreams and best interests at heart, something had begun to shift between us. She no longer assumed that I would find the next big job. And I was no longer telling her that my next corporate gig was my priority.

I began to shift my dream away from the big corporate role the day I heard about the heart attacks on campus. I was under that same kind and depth of pressure at work. And going into year two, I was put under a manager that had no interest in managing. Talk about someone who could care less about holding your dream. Before our second team meeting, when I offered him an agenda for the hour, he balked and refused my suggestion. Dang, my road ahead was going to be rocky indeed. And it was over the course of that next year, that I began to understand how important my time and my health were to me.

And then I was out. On semi-vacation. And what should have been a moment of relaxation and joining, turned instead into an ongoing disagreement about money. I was looking for work, but I was also setting up some consulting work that might turn into something more sustainable. But the scariest thing I did, in her mind, the thing that caused immediate friction, was I launched a blog on social media marketing.

I saw an opportunity to capitalize on what I had learned, and the company I had been a part of, by writing a marketing blog. At the outset, I did not see it as my next career, but as a way to set up my next job. I was putting into practice all the marketing and content development ideas I had previously done for other companies. And I suppose it wouldn’t have been much of a threat to her if it had fizzled and not generated any traffic.

I began to hit stride after about three months. I had several consulting projects. My blog posts were getting better and better. And while I was putting in several job applications a week, I was more excited about the potential for building my own business again. (When we met I had been consulting successfully for several years.)

Again, I can’t put myself in her place and interpret her actions, but things didn’t get easier as the six-month sabbatical was winding down. She too had started trying to reset what kind of work she wanted to do, so now we were both about to be “out of work.” Except I was still bringing in money. She was not. And perhaps that was the crisis point.

Just as I was seeing a light of possibility to get my consulting work built back up, she was starting to doubt if I was ever going to get the big gig again. Maybe that would’ve been easier on the family, but it was killing dad. I was at least exploring some alternative plans.

While I had begun to chart a path for my next dream, she was frustratedly waiting for me to turn the financial tap back on. I know this is over-simplifying a difficult and very personal moment of truth. But we were no longer on the same team. Somehow, my blogging and consulting was against her dream of remaining a 15 – 20 hour-a-week worker. We were not communicating very well.

For me the future was bright and I could imagine what I was working towards. For her, the future sounded a lot like full-time work, and though we had discussed it once the kids were in elementary school, I don’t think that was the direction she was ready to go either.

In the end, I could only hold my dream for myself. The social blog led to a relationship blog which led to this Positive Post-Divorce blog. My dream is still unfolding. And while there is no money in this work today, I suspect that my next chapter is going to involve publishing and speaking about positive divorce and co-parenting.

I could never have predicted that my divorce was going to be the force that unleashed my writing in a new and powerful way. But now, 4.5 years later, I’m happy to be exactly where I am. And I hope that she too is happy, but I can’t really tell either way. And I know she’s not pleased about this blog, even as she acknowledges we have both benefited from the growth it seems to have facilitated in me. Of course, she’s a much more private person.

She asked me not to write about her or the kids, ever. But, I’m sorry, that’s the only way I can talk about what’s going on for me at this amazing juncture in my life. I’ll try to do my best at remaining focused on me, and my feelings and thoughts. And so far, one year in on this blog, I’m fairly proud of the progress I’ve made as a father, co-parent, and writer. Only I can keep working towards my own dream. And along the way, if I can relate a small moment of hope from this experience, that’s going to be my guiding light.

I’m holding a bigger dream for myself and my kids.

We All Need Someone We Can Lean On

Heading Into the Holidays with Intention and Joy

May 2, 2019
Tags: anger issues, coparenting issues, dads depression, dealing with an angry ex, depression and divorce, fighting for your life, holding on to your dreams, mens depression