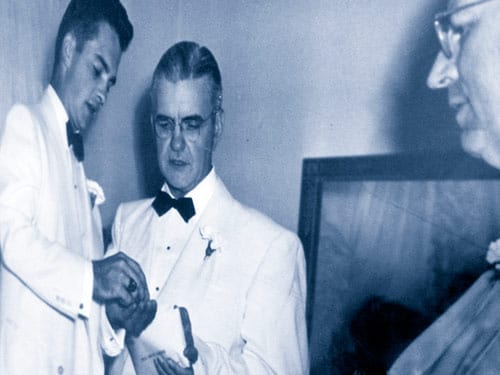 I don’t know much about stable foundations in marriage.

I have aspirations and concepts of what a solid marriage might look like, I see infrequent examples. But still I hope. Well, let me restate that, I hope for some solid foundation in my next relationship that was lacking in both my marriages. If the form that takes is marriage, so be it, if it’s just a rock solid relationship, I’m not all that concerned about appearances or child tax credits.

Let’s look at how I think my marital foundation fell into disrepair in my 11-year marriage that brought me two great kids and unimaginable grief.

It’s not the vows that create a marriage. It’s not really even the goodwill and good intentions of the partners. My ex-wife and I were smart, previously married, and well-worn in the challenging aspects of relationships. And when we began dating the world looked so bright and magical. Admittedly some of it was glow and passion. And some of it was the fact that we had known each other in high school, though we never dated.

We were both in our early thirties and both interested in having kids. Me, not right away, but certainly within the next 5 years. She felt more time pressure, as would be expected, and she had a more logical process for achieving her goals. I sputtered and soared based on emotional energy and inspiration. She was more studied and methodical. She always had a plan.

And on we sailed into the love hurricane of children, without much drama or conflict. We were both ready to grow beyond our self-importance into something much bigger: parents.

Along with kids comes the myriad of changes in things like housing, neighborhoods, schools, sexual desire, chores, kid duty, and basic grown-up stuff like bills, insurance, and work. And initially, these massive transitions were handled with grace and co-creative strength. Still, even under stress, things were sailing in the right direction with perhaps a bit more effort than we expected. But we were good. We were a family. We had a boy and a girl. Perfect.

The bedrock of our foundation had not yet been tested. And when things began to get tough our two different coping mechanisms caused us to go in opposite directions when dealing with stress. My more emotional (feminine) process was subject it whims, highs and lows, and the whole rush of the creative process. I wasn’t always easy. Her stress management usually involved building excel spreadsheets of chores or money or upcoming decisions we needed to make, rationally, and with all the facts.

What had been quirky but manageable in the first years of our marriage, became less predictable and less supportive as we were forced to deal, and deal differently yet together, with the twists and turns of life.

Here’s where the foundation of our marriage appeared strong to me while the relationship was sometimes hard and sometimes less hard. On the other hand, some part of the unpredictable husband and his less organized approach to the rough patches were beginning to threaten the foundation for her. While I plodded optimistically along, saying things like, “We don’t really like each other right now, but we’ll get through this.” She began to express dissatisfaction with our relationship. What I didn’t know is the marriage was also at risk and becoming less sustainable for her.

When standing on the strong foundation of my marriage I was ready to fight for what I wanted, I was not worried or threatened by the anger or disagreements. I was so sure about the marriage that I was also sure that we could weather any of the myriads of minor storms in the present and in the future. I was wrong.

I could hear the signals, I could hear her telling me she did not like me very much. I could see her daily routines becoming more driven by anger or resentment week after week. But I was certain we were working our own programs, and doing the best we could during a rough period. And I was certain the solid rock of my commitment and trust in the marriage would see us through all this mundane crap.

And then in couples therapy, I began to get a different picture.

During one session our therapist asked us to describe our relationship in one word. I went first.

She thought about it for a minute. “Cynical.”

I was crushed. Cynicism seemed to mean defeat. I felt like the hopefulness was being countermanded by hopelessness. Maybe she was seeing the writing in one of her spreadsheets. But she wasn’t sharing all of the information with me.

A few sessions later something had shifted dramatically. We’d had a very large rift. And it was MY FAULT. Obviously, it was my fault. But her approach and mannerisms were off in the session. I couldn’t hold my question. “Have you gone to see an attorney?”

It was the flash moment before the end game of my marriage. The foundation I had counted on for strength and fight, even as I worked from a hopeful perspective on a fractured relationship, was no longer in place for her. She was considering her options.

Today, as single and dating adults we don’t want to miss that fundamental flaw that causes the happiness in a marriage or relationship to flow downhill until the couple is divorced. If there is one thing I’m afraid of it’s not the commitment, it’s wondering what we could’ve done differently to keep things strong and alive. Was there too much difference in our lifestyles and approach to stress and life to ever make the “forever” thing work? Is forever really even a potential for more than some magical 10% of haloed marriages?

Two smart people with good intentions entered into a contract and sprouted two beautiful kids. What would’ve gone wrong did. And the foundation which still seemed strong and intact to me, was no longer sustainable for her.

I am not sure I know what makes for a solid foundation anymore. I’m not sure marriage is the best structure for today’s coupling. And actually, I don’t even know what “coupling” means anymore. Has the relationship today, as consenting older adults with kids become more of a “friends with benefits” model? Is that okay? Can we sustain a lifelong relationship with an FWB or does the marriage provide some trust that is not inherent in being “in a relationship?”

Obviously, I don’t know the answer. But I know more about what happened to my marriage. And as I imagine what’s next, who’s next, or even how to get from alone to “in a relationship,” I am curious to learn more about how to build a better foundation. The longevity or formal contract is much less important to me.

image: my dad getting the ring from his dad, and my mom’s dad looking on

Spread the love
Tags: family of origin, how my marriage broke up, marriage problems, my dad's divorce, my family, my parents, when i knew it was over

Mind the Gap: Listening for the Signals from Your Lover