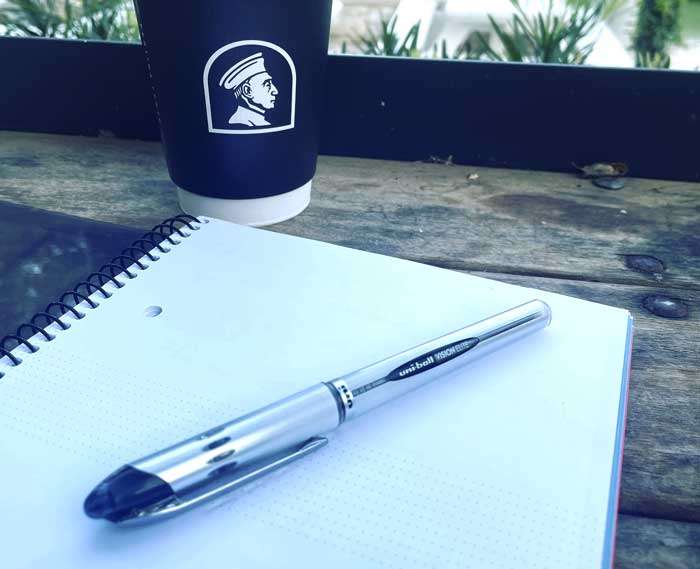 On the morning when the big idea comes, it is important to be flexible with your time and energy. If you are rushed, the dream may never make its way to paper. If you are stressed or exhausted or hungover you may miss the significance. But a poem left in your mind will either become a virus growing with its own momentum, or a forgotten glimmer of light.

How Well Are You Listening?

This morning, for some reason, I woke up at 3:15 am. I was not really ready to get up and get started with my day. My brain had other ideas. I went to the bathroom and decided to give sleep one more go. I added headphones and a nice ambient track to soothe my mental firings. There was no poem, no story, no idea, causing my synapses to dance. It was just an awakening. “Enough sleep,” yelled my brain. “Bring me some dark roast with a hint of coconut oil.”

When the muse does come it is vital that you give it time and space to bloom. This morning started with little of note. The coffee was easy. My agenda was open. The sleeping dogs on the couch remained sleeping, though the big one’s tail started twitching at me. I lit a candle. Said a prayer of hello to the ghosts on my mantel. I sat quietly. There was nothing.

This is a very important moment. Most of us, me included, rush into the next thing. We get on social media, we turn on the tv or podcast, we jump into motion without giving our awakening time to happen.

Today, I’m not sure where the spark ignited. I had an idea to tell a previously mined article about the return to work into a short-short story. The ball was rolling.

I let the dogs out after I completed the simple abridged version of my bad boss complaint. Again, not a lot of momentum or inspiration. Plenty of quiet, however. The dogs bolted into the dawning back yard and I took up residence in an old rocking chair that was left behind by the previous house owner, eighty-seven-year-old, Royce. I sat there in Royce’s chair, drinking coffee, starting to cast around for inspiration on the computer.

What You Do With Your Inspirations

I no longer worry about exactly what I’m writing or where it will fit in. I have more projects and mental architectures than I could explain. I just let it flow. Poem? Great. Article or chapter? Okay. And in the last month, I’ve been enjoying short-short stories. In the vein of O Henry, I’m weaving some short narratives that give me freedom and pleasure. A complete project in a half hour. That’s a great feeling. Completing a creative project. Give yourself more ways to have that YES feeling. DONE!

Keep writing. Journal. Draw. Sing. Do whatever it is you do when you’re soul is shouting out in glee. For me, this is writing words and songs. It seems random, this path I’m heading down. But it’s actually more than that. The path of the unknown is magical. I don’t imagine that I’m going to be nominated as the poet laureate. That’s fine. I don’t need you to applaud me or my efforts. At least, that’s what I say now. When I was younger I desperately wanted to be a famous actor. Later I would wow the world with a great American coming-of-age novel.

For now, the craft, the self-awareness, and the self-satisfaction is the thing. I’m not asking you to read my work. I’m putting it out there, take it or leave it. I am interested in building new threads, new paths, and new horizons in my creative adventure. But, as the work is coming, as the words are spilling off my fingers on the keyboard, or my guitar is stroking some deeper sadness than I had been aware of… THIS IS THE REWARD.

What I do with those creative projects is a different matter. Let’s stick with the inspiration for the moment.

A few of my favorite writers got very good at pulling their own inner ripcords. Kerouac, Henry Miller, Hunter S. Thompson, Whitman, D. H. Lawrence. Zip zoom, bamb boom, they were off and running. Where their madness would lead us was unknown and exhilarating. (Yes, I’m aware there are no women in my list. Perhaps Anais Nin, Ursula Lequin, Joyce Carol Oates.)

Take me on a trip. Rip my mind open with a turn of phrase, or an acceleration of something dangerous and unstable. Let the words blur with the light rain you are describing. Let the high affect the punctuation and word word word choice. Blow your trumpet. And burn/blow/glow until you’re spent.

That’s my favorite kind of writing to read. I’m still working on how to write with that muscular abandon.

Creativity and mindfulness go together in my life. The more I’m in touch with myself the easier I can tap a vein.

I am a relationship coach and a dating coach. I coach women and men in 1 x 1 Zoom calls. I work in monthly blocks (1 session per week). We establish a relationship. I become your wingman in navigating and sorting through the personal journeys of dating, parenting, and relationships.

Announcing the Little Book of The Third Glass

She Was Lovely and She Liked To Drink: A Third Glass Love Story

December 19, 2021
Tags: Burn Bright and Vigorously, Creativity and mindfulness, cultivating creativity, finding creativity, How Well Are You Listening?, mndf, morning pages, the artist's way, What You Do With Your Inspirations, writing, writing and coffee, writing community