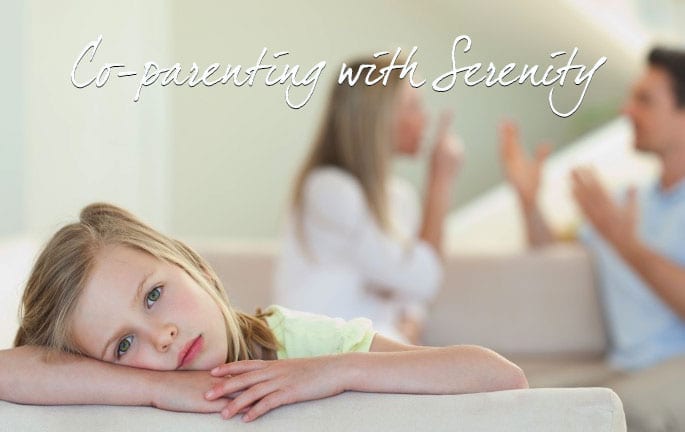 Co-parenting is about accepting the other person for who they are, exactly as they are, and holding them in the best light you can.

As we walk through our individual lives we necessarily come in contact with a lot of other people. And the primary relationship with our significant other is going to be the deepest journey of our life. Yes, we’ve got to figure out our own B.S. so we can self-regulate and learn to mind our own business. But in our primary, one-2-one, relationship we’ve also got to learn to love another person even when they are dealing with their own personal struggles.

It’s hard not to tell others what you think. It’s double-hard not to tell your partner what you think, especially when you imagine you can see a better approach for them. But even in that deepest of emotional and physical relationships, you cannot really know, really see, what’s happening in the other person’s mind. You might think you know. But the right answer you imagine, the minor tweak you see that could make their lives so much easier, is a figment of your imagination.

It’s more than minding your own business. That’s an idealistic goal that is easier to imagine than to put into practice. The act of allowing your lover, partner, co-parent, to flounder and fall and struggle, is actually the deeper gift.

In my life I have struggled with periods of depression.

The first appearance of the black dog came while I was a freshman in high school, fourteen going on fifteen. I was “away” at a prep school in New England, and while I should have been having the time of my life, I began to unravel a bit as the Winter came on with a vengeance and my natural exuberance began to falter under the dark days and extreme conditions. As November and my 15th birthday arrived, I was concerned that something was wrong with me.

I remember a few of the moments quite vividly. I was struggling with my first foreign language, Spanish. And something about my brain just felt off. I tried to study each night during the enforced study period from 7 – 9 pm, but I found myself staring at the pages rather than reading them. I sought advice from my advisor. She was even more clueless than I was about why a young seemingly normal teenage boy would struggle so much. Her advice was more like a form of scolding. Even though I had sought her out she used the opportunity to recant the rules and policies of study period, and maybe I was just goofing off more than I should. “Maybe you shouldn’t play music in the room when you’re trying to study.” That was her highest thought. It was a disastrous year.

Over the course of the next 15 years or so, I struggled a bit with the black dog, but for the most part, I got better help, used various therapeutic remedies both chemical and verbal. It was a bit of a jagged line, but I’d say my line graph trended in the upward direction overall, between the collapses.

It turns out, depression is part physical and part mental. And according to Peter Kramer in Against Depression, the body begins adapting and changing physically as a result of the swings down into the pits of darkness. As a person experiences depression several times, the body begins to identify the early symptoms and essentially leans into the chemical pathways that cause the depression to strengthen and deepen. Depression becomes a learned coping mechanism in response to periods of great stress. And after those neural pathways are connected by the initial bouts of uber-sadness, they become more likely to get fired up and activated with stressful events.

And the dark thoughts multiply and begin the pull downward even as the poor depressed person is acutely aware of what’s happening. It’s a bit like a Hitchcock scene from Vertigo. You see the dark ground below, you begin to tremble and swoon with dizzying panic, and in an act of escape you actually jump towards the blackness.

The Black Dog Stops By Again

In my second major moment of fear and despair, the darkest moment of my life, I can remember the taste of the fear as it leached in and sucked the joy out of my heart. I was married with one son and another child in-the-oven, and I cannot begin to imagine the frightening experience my descent must’ve caused for my then-wife. And she’d had some experience of deep sadness in her life and in her family of origin, just like me. It’s part of what bound us together, this recognition and acceptance of our moodiness. It’s part of who I am.

This time, as an “adult,” the onset was more noticeable and pronounced. I never tried to hide what was happening even as I was trying to cling to the joy in my life as a metaphorical cliff edge. I sought out medical help. I sought out spiritual and mental help. I sought out my own inner work. I tried running as therapy. I tried focusing on the good in my life, the beautiful pregnant wife, and the amazing baby boy, but nothing could lift the filter of fear that had started forming between me and my experience of life.

It was during this time, as we struggled as a little family in crisis, that I became dependent on my wife for my own survival. I know this was an unfair burden to place on another individual, but I was unable to see the way forward without some form of counsel and daily encouragement. It was a dark time indeed.

We survived. I survived. The marriage survived. And over the next few years, filled with diapers and tears, I began to get my footing in the world of work and the optimism of life continued to grow in all of us. And just at this time, my wife experienced her own moment with the black dog. I was back, ready for bear, and again we persevered. We didn’t exactly thrive, but the joyful days outweighed the mournful ones, and we gave our kids the optimism-in-spite-of-the-moment, that they still rely on today.

In periods of great drama and stress you either split apart or you deepen your connection to your significant other. And maybe the deeper story in our case was a little of both. In my “video camera” retelling of the story, I would color things with a slightly rose-colored lens. I might say, “We went through it, we survived, we’re stronger than ever and ready for what’s next.”

My then-wife’s retelling would vary in one significant way. “We went through it, it was hard, we’re stronger now as individuals, and I think my happiness will return outside the marriage rather than continuing in this way.” And at this moment today, 6+ years after the statement came out of her mouth, I cannot begin to imagine what was going on inside her during those final months of our marriage.

I had learned that I could only rely on my own best thinking, and take care of my own actions. And even as my then-wife was making choices that I didn’t agree with, I was ultimately accepting of her decision. I saw things and experienced things very differently. I imagined our future together *with* this additional strength. She saw our future ahead with this additional liability.

The darkness we had suffered and recovered from together had changed us in different ways. I wanted to return to the relationship with her as the start of the next chapter. She wanted to set out and find a new partner for that next chapter. It would be absurd of me to characterize of attempt an understanding of her experience and her decisions.

We passed through several dark nights of the soul together. And as we go forward in our kid-connected lives we will still have moments where we think we know what would work better for the other person. It’s pretty clear, from this side of the divorce, that I had no clue what was happening in her mind during all of those ups and downs. Her actions for part of the experience were connective and supportive. At some point, after she grasped that she could not change me back into someone she loved, she decided to make plans to seek a different relationship.

I’d like to put a bow around this difficult story with some sort of statement of a silver lining. Something like, “We’re better for it, we’re stronger because of it, we all have a more realistic view of life and dealing with setbacks and disappointments.” And while I can’t really say that, I can say that I had no idea what my then-wife struggled with during my dark times or her dark times. What I knew was that I had another person in the storm with me, holding my hand.

Even today, nearly 5 years after the divorce, I can’t project thoughts into her mind. I can imagine that I understand the idea behind some of her actions, but it’s only my projection. I have no idea what goes on in her mind.  That’s okay, that’s not the idea. Co-parenting is about accepting the other person for who they are, exactly as they are, and holding them in the best light you can.

Occasionally I get mad and I don’t see my own part in the dynamic, but for the most part, I have learned to mind *my* business, to pay attention to *my*actions and *my* words. That’s the best I can do, always. That’s all I can do.

More from The Whole Parent

Online Dating Adventure: What Is Your Quest?