When you go down the path of divorce, however you got there, a few realities are going to rush up and greet you rather quickly if you are a dad.

Time and Money as a Divorced Parent

There are two important issues that it is critical for you to understand. Time and Money are the only negotiating points you have. Let’s jump straight into the story, shall we…

The legal system is set up to support single moms and to force dads to make their child support payments, regardless of changing situations or dad’s ability to pay. That’s not their problem. And the typical support package includes the Standard Possession Order and some percentage of your income, depending on the number of children you have. Let’s get real clear on both of these new realities in your life, as a dad.

The Standard Possession Order is the parenting schedule you will most likely be offered. The reasons behind this 70/30 parenting split were established by the state over years of divorce and custody battles and negotiations. The rationale behind it sounds like it made sense 30 years ago.

The mother as the primary caregiver will be given the majority of the time with the kids. This allows the continuity of their primary relationship in this trying time. This leadership role will be called the custodial parent. The Attorney General’s office, should they ever be needed, will treat the custodial parent like a client. The non-custodial parent, on the other hand, is a bit of a second-class citizen. This morning when I was confirming some of the details about my current arrangement, I noticed this contact list on the AG’s website. 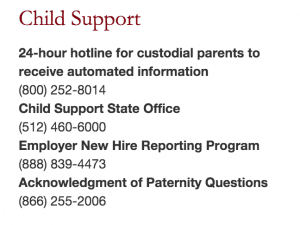 The custodial parent gets their own line. As do employers and people not so certain of their paternity obligations. All others please call the general number and get put on hold and endless transfers through voice-activated systems. “If you are the custodial parent, press one. If you are the non-custodial parent [the only reason you are calling us is because of a problem, and you’re probably a deadbeat dad] press two.

Time and Money. Those are the two negotiations you will have to settle in order to get divorced. I was the uber-cooperative divorcé. I agreed to everything. I was told it would be in the best interest of the children for the mom to get the house, the child support, and the lion’s share of the time with the kids. I had a naive idea at the outset that we would divorce 50/50 just like we had parented. I was wrong. And the state’s attorneys have given us a lot of precedents that show this role for the dad is the best one.

Non-Custodial Parent. Standard Possession Order. Child Support. Those three little phrases are about to become very important in your life. And your understanding, navigation, and negotiation in setting them up, might save you a lot of the heartache and drama that I’ve been through.

The 70-30 split sounds a bit abstract until you are in the middle of your “off” week and you are trying to imagine surviving the next 4 days until you see your kids. Here’s how the typical schedule breaks out. Dad gets the kids every other weekend. During dad’s ON week, he gets two additional nights. Thursday and Friday. If your kids are already in school, that’s really after school time, and getting them up for school on Friday morning and Monday morning, if that’s your schedule. (All schedules can vary and still be basically the SPO.) On the OFF week, you may or may not get a single night sleepover. Again if your kids are in school, that’s really one cycle of feeding, homework, and back to school the next morning. Those single night stays were hard. The loss when taking them to school on the off Fridays was brutal.

Time with my kids was the most important aspect of my life after they were born. Everything I did, I did in consideration of my then-wife and my kids. I centered my hopes and dreams around being a great dad and being there for them every night, every volleyball game, every time they needed advice. And when they were younger, say after 3rd and 5th grades, they really did need a lot of interaction and caring. When my time with them dropped so significantly, I began to crater on the days and weeks that I had zero access to their smiling faces. I might have done better to fight and receive a more equitable divorce. Maybe Joint-Custody and a real 50/50 schedule would’ve provided more connections between us. Maybe I’d have been able to get my son into tennis or bike riding. Maybe I wouldn’t have crashed so hard into depression.

When I was thinking about the math last night, I was surprised to understand that she had the kids more than twice as much as I did. The 70/30 split is very abstract until you are losing so many nights and weekends with your kids. I still think a 50/50 schedule would’ve been better for my kids. And today, I have some ideas that might make that possible. But today my kids are teenagers. Today they have their own independent lives. Today, my interactions with them, even when they are here, is fleeing, abstract, and often superficial. I dig being with them, and I try and make myself open to their questions. But at this stage, the lead in the relationship is up to them. Asking your kid, “What happened in school today,” will never get more than a “not much.” When your kids want to chat they will seek you out. By being available, still only 8 days out of a 30 day month, those opportunities have smaller windows.

So my ex-wife gets more than twice the time with the kids. Wow. It’s a lot. But until you’re IN DIVORCE and have kids, you can’t really understand what the loss means. It took the breath out of me for over two years as I struggled to stay brave while I was with them, and suffer greatly when they were gone. The OFF parent has a lonely road ahead.

This is where the rubber meets the road in divorce. In general, the dad will have the child support obligation. The idea is that he is often the primary breadwinner, or at least as a man, employable at a higher wage. And as the story goes, the kids and their mom should be able to continue with the lifestyle that they have grown used to. (No mention of what’s about to happen to dad’s lifestyle.) And while that language sounds okay, the execution of these documents is often brutal and pugilistic.

Here’s an abbreviated version of what my “deal” looks like.

29% of my take-home pay will be paid to the ex-wife for the children’s care and feeding. That money is tax-free to her since the taxes were taken out of my wages prior to the withholding. Wow, that’s a pretty good deal. Seems like it should be a deduction for me and the taxes should be taken out equally. But that’s not how it goes.

And if you have or hope to have a high-paying job, that’s the mark you will use in the negotiations for the decree. In my case, the rough number was set at $1,350. Okay. But wait, that’s not all. In most cases, the dad is also responsible to pay for health insurance. Again, this might be fairer if it was split 50/50 but that’s not usually the way it’s done. Again, I think this was set up when dad had the big job, and this would prevent him from taking that job and losing the good insurance as a way of punishing his now ex-wife. Either way, this additional obligation is tacked on to the sum of $650 – $1,100 depending on your plan and employment status.

So, just to sum things up for you. At this very moment, since I am employed by a contractor who does not offer health insurance benefits. My monthly total in child support obligation is $2,300. Wow. That’s a chunk of change. It puts a significant squeeze on my opportunities for employment since I have to make that before I can begin to think about rent, food, car insurance, phones, for myself. If you start every month with a $2,300 bill, that’s a real demotivational blow. It has felt insurmountable from time to time.

And when I lost my job, as a result of the tanking economy, the child support obligations or payments didn’t change. I could’ve hired an attorney and asked for a reduced child support payment, but I didn’t have the time or the money to do that. I was trying to figure out how I was going to keep my house. The house that I’d managed to buy, in spite of the large child support payment, when I landed a great new job, post-divorce. Only the great job didn’t last. The startup changed its business model and eliminated my director-level position.

The killing blow, the unforgivable transgression that I’ve had to forgive, came when my ex-wife decided the proper course of action would be to turn my late support payments over to the AG’s office for “enforcement.” This one act of anger has cost me and my family thousands of dollars and has actually gotten less money into my kids’ pockets. And the debt, as seen by the state, is a huge lien on my credit. This one act caused me to lose the house. And for one year, I actually had to live with my mom again. Fortunately, she and the kids and I had a humorous attitude about the whole thing.

“It’s better than living under a bridge,” my mom would joke. And she had a garage that we converted into a place for my bed. The kids each had rooms. So in my mom’s house, at least I was able to accommodate my weekends. By filing with the AG’s office, while I was trying to restructure my debt so I could keep the house, was the last act of anger and aggression that she could take. She took it. I lost everything.

From those ashes, however, and even under the $2,300 monthly payment, and now a big fat lien on my credit, that prevented me from qualifying for a used car loan when my car was destroyed in a hail storm, despite all of that, I’m still surviving. I wouldn’t say thriving yet, but I’m getting by.

When you are considering divorce, as a man, consider the two most important issues as a parent.

Finally, if you’re going to agree to a cooperative divorce, make sure you add in a clause about NEVER INVOLVING THE ATTORNEY GENERAL’S OFFICE. EVER. My ex and I were in an argument about the timing of my child support payments and how I was planning on catching up when I lost my job. She waited a few months. At this time she began to get very belligerent. She refused to meet with me in person about parenting or school issues. Her response to my email requests was simple “when can I expect my money.” That shut down all opportunities for co-parenting that summer.

The Power of Sex: Let’s Explore the Edge of the Unknown Together

a second fortune : a poem